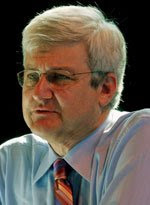 With the class of 2009 now safely out of GW’s hallowed (and under construction) halls, now is the perfect time to provide departing English majors with reassurance in the form of another Featured Alumnus blog post. Our subject this week is Mark Olshaker, a 1972 graduate of the GW English Department. As you’ll find, Mr. Olshaker is a poster child for the liberal arts education, having put his English degree to good use as a writer, producer, filmmaker, and philanthropist. His career has spanned best selling novels, Emmy awards, and collaborations with notables such as John Douglas, Paula Apsell, and Kenneth Branagh. My interview with Mr. Olshaker was so rich with advice and anecdotes that it is being split into four parts, running the length of this week in recognition of the beginning of June and the beginning of the careers of our 2009 graduates.

Part One: Student Protests and Student Journalism
Although it has been over 30 years since Olshaker matriculated at GW, the campus is still familiar to him. “I walk through the same streets here and see many of the same buildings, and it sure doesn’t seem like very long ago… The four years that I was here at GW were a very exciting time; an usual time. A lot of what people my age remember is simply being young; whatever time it is that you’re young you look back at with nostalgia.”

In the autumn of 1968, Olshaker became a freshman at GW and joined a campus marked by protest. Student protests, inspired by those at Columbia University by Students for a Democratic Society, had spread to the nation’s capital. “It was very dynamic. GW, being the closest university to the White House, became the staging ground for a lot of protests and a lot of action. Very few people my age do not recognize the smell and feel of tear gas as a result.”

Olshaker admits to participating in the protests, but considers himself a liberal, not a radical. “There was a certain amount of radical sheik at that time, and I was somewhat on the oust because I considered myself––and still do, interestingly enough––a liberal. In fact, one of the great informing experiences of my reading life was here at GW, reading Lionel Trilling’s book The Liberal Imagination. But most people considered themselves radicals, and if you were not a radical, there was something almost déclassé about you… I kind of strode the fence, as did a lot of people in those days.”

Though life at GW might have centered on student protests, the world outside Washington, D.C. saw little of this. Olshaker recalls commuting to Frederick County, Maryland during his freshman and sophomore years for a job as a disc jockey at a country-western radio station. “During that time, I was living a very schizophrenic existence: the radicalism on campus was very cutting edge, and it was what everybody was reading about; on the other hand, when I would repair to the mountains of rural Maryland, it was as if nothing had changed from the ‘50s. The two worlds I inhabited really didn’t understand each other and had almost nothing in common with each other.”

Olshaker also covered the protests while working for The Hatchet, though his regular position was as Arts Editor. “In those days everybody pitched in whatever needed to be done. A lot of the reporting was very spontaneous because of what was happening… So I ended up doing a fair amount of regular reporting as well.”

The beginning of Olshaker’s senior year, fall 1971, also saw the opening of the John F. Kennedy Center for the Performing Arts. Due to his experience at The Hatchet, he was asked to help promote and develop the Kennedy Center’s new American College Theatre Festival. Olshaker credits this experience with enhancing D.C.’s theatre community, not to mention his own love for the art form. “Washington is certainly the number two theatre town in the United States, and… it was already showing some strong signs of that back in the ‘70s.”

Olshaker enjoyed many successes with The Hatchet, but only dabbled in journalism after leaving GW. He worked briefly for the St. Louis Post-Dispatch before becoming a “generalist writer,” who has since gone on to write for the small screen, the big screen, newspapers, and publishing houses. For more about Olshaker’s best-selling crime fiction novels, check back Tuesday for Part Two of Featured Alumnus: Mark Olshaker.

On Feb. 24, the English department cosponsored an event with the Office of the President honoring new Folger Shakespeare Library Director Michael Witmore, who assumed the position in July after the retirement of GW Prof. Emerita Gail Kern Paster. Pres. Knapp and Diane Knapp opened the F Street House to about three dozen invitees, including…

We know it’s early to be advertising this, but why not place the date on your calendar now? Edward P. Jones, the first Wang Visiting Professor in Contemporary English Literature, will give his inaugural reading on Thursday January 29 2009 in the Jack Morton Auditorium (School of Media and Public Affairs, 805 21st Street NW)….