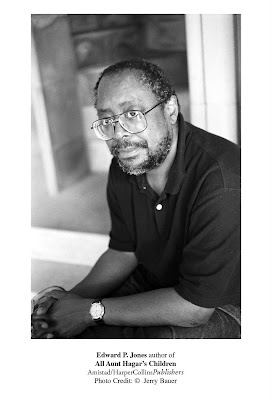 We’ve already told you how to take a screenwriting course with famous producer and screenwriter Jason Filardi. Would you also like to take a course in writing fiction with Pulitzer-prize winning novelist Edward P. Jones?

Jones will be in residence at GW during the spring semester of 2009. If you would like to be considered for admission to his creative writing course, simply print out and complete this form (or pick up a copy from the English Department main office) and return it to us with a writing sample as soon as possible, and no later than November 7.

I’m appending Jones’s official biography below. Dare I say, once again, that the chance to study with an author of such high renown is a once in a lifetime opportunity? Miss it and you’ll be kicking yourself for years to come, even perhaps as you enter doddering senility. That’s what once in a lifetime means. This chance isn’t coming back.

Edward P. Jones was born in Washington DC in l950. He attended the local public schools and won a scholarship to Holy Cross College. Seven years after he graduated from college, he earned his M.F. A. at the University of Virginia.

After a series of jobs, he began working for a tax newsletter, first as a proof reader and then eventually as a columnist, the latter job he held for over ten years. During this time Jones kept on writing. His first short story was published in Essence in l976. Since then he has had stories published in The New Yorker, The Paris Review, Ploughshares and Callaloo. He has taught creative writing at the University of Virginia, George Mason University, the University of Maryland and Princeton University.

Edward Jones’ first collection of Short Stories, Lost in the City, was published in l992 and won the PEN/Hemingway Award, was short-listed for the National Book Award and was the recipient of a Lannan Foundation Award.

Jones’ first novel, THE KNOWN WORLD, published by Harpercollins Publishers in September 2003, received the 2004 Pulitzer Prize for fiction. In addition, it won the National Book Critics Circle Award, was a finalist for the National Book Award, and won the international IMPAC Dublin Literary award and the Lannan Literary award. Edward P. Jones was named a MacArthur fellow for 2004.

In 1894 literary scholar George Saintsbury coined the term “Janeite” as a devotée of Jane Austen. Professor Maria Frawley (pictured with her cat Zeke) is a self-proclaimed Janeite, although she would like to emphasize that Janeites are scholars as well as devotées. You cannot deny this fact when meeting with the witty and warm Frawley…

Though our site is only a day old and therefore has little content that makes it worth your time, nonetheless — because we like to be popular, and don’t want to be like one of those departments no one likes (Statistics, do you hear us?) — well, for that compelling reason alone we say: if…

by J J Cohen So you may have heard that the DC area has gone a bit overboard in prepping for the Inauguration and its attendant hoopla. All bridges to Virginia, for example, will be closed — apparently to prevent Karl Rove from leaving his home in Arlington and mingling with the multitudes. I am…

RateMyProfessors can be a delicate subject for faculty members, who often mistrust and fear it the way business owners mistrust and fear Yelp! (“The food was awesome!” “The food was inedible!” “Awesome!” “Inedible!”). But according to an interesting piece in The Hatchet, the site ranking system seems to produce results that roughly mesh with evaluations…