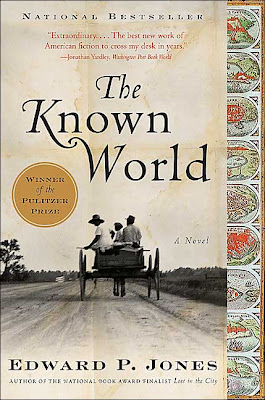 Now that we have officially announced that Pulitzer-prize winning novelist Edward P. Jones will be our first Wang Visiting Professor in Contemporary English Literature, I want to share with you one of my favorite passages from one of my favorite books. The Known World follows the complicated history that unfolds around a Virginia plantation, owned by a former slave who has purchased slaves of his own to work his new lands. Under terrible circumstances this man’s father, freed many years ago by his son, is transported far from his home and sold back into slavery. He dies, and loosed from the prison of his body seeks the woman who awaits his return:

When Augustus Townsend died in Georgia near the Florida line, he rose up above the barn where he had died, up above the trees and the crumbling smokehouse and the little family house nearby, and he walked away quick-like, toward Virginia. He discovered that when people were above it all they walked faster, as much as a hundred times faster than when they were confined to earth. And so he came to Virginia in little or no time. He came to the house he had built for his family, for Mildred his wife and Henry his son, and he opened and went through the door. He thought she might be at the kitchen table, unable to sleep and drinking something to ease her mind. But he did not find his wife there. Augustus went upstairs and found Mildred sleeping in their bed. He looked at her for a long time, certainly as long as it would have taken him, walking up above it all, to walk to Canada and beyond. Then he went to the bed, leaned over and kissed her left breast.

The kiss went through the breast, through skin and bone, and came to the cage that protected the heart. Now the kiss, like so many kisses, had all manner of keys, but it, like so many kisses, was forgetful, and it could not find the right key to the cage. So in the end, frustrated and desperate, the kiss squeezed right through the bars and kissed Mildred’s heart. She woke immediately and knew that her husband was gone forever.

That passage is so vivid, so unexpected, so right in its description of grief and loss and love that it makes my eyes tear to read it. We are very fortunate to have a writer as gifted as Edward P. Jones joining the English Department in the spring. I hope that you are anticipating his residency as much as I am.

We will offer many opportunities for our students to work with Jones, and many as well for our alumni to meet him. Keep reading this blog for updates.

Please join us for a book launch celebration José Esteban Muñoz Wang Visiting Professor of Contemporary English Literature Cruising Utopia: The Then and There of Queer Futurity Thursday November 12 2 PMEnglish Department Seminar RoomRome Hall 771 Professor Muñoz will read from and discuss his new book. Champagne, sparkling cider, and snacks will be served….

The drywall came tumbling down today! Here is a photo of our lounge-in-process. Right now, the main office is a bit of a mess, and the hallway is currently serving as the location for faculty mailboxes, but we’re hopeful that the renovation will create a better community space by combining two smaller spaces.  Now we…