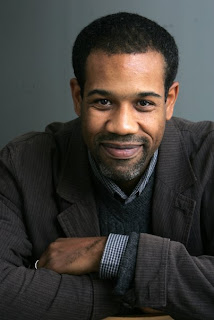 Stepping into Gregory Pardlo’s office is an odd, but charming combination of thrift store and art museum. Picasso adorns the wall as well as a salvaged window screen from Brooklyn. They are not just mere decorations, but help to explain some the fundamentals of GW’s newest creative writing professor.

For Pardlo is not just a creative writing professor, but a well recognized poet. A man who takes inspiration from everything around him: working at his grandfather’s jazz club, Steven Speilberg movies, Bob Dylan lyrics, and Walt Whitman poems just to name a few. The inspiration seems to be working. Pardlo has managed to finish a Bachelors, MFA, and a considerable amount of a PhD, win three prestigious poetry awards, and even get married, have two daughters and buy a house, all since 1995.

Pardlo is clearly driven, but surprisingly poetry did become his focus until age 25. “I’m coming from a working class background where poets are the marble busts in the library, not vocational,” he said. Poetry was always an interest for Pardlo though. A lifelong guitar player, he always loved music and eventually realized that what drew him to artists such as Bruce Springsteen or Prince was their lyrics. Pardlo said, “So it was a natural progression to begin writing poetry from lyrics.”

Even with this revelation Pardlo played around with several majors in college, eventually dropping out to travel. He called Denmark home for a year of his life, later leading to an interest in translating Danish poetry awarding him the National Endowment for the Arts Translation Grant in 2006. Finally after a stint working for his grandfather’s jazz club, Pardlo reemerged in academia where only one semester of poetry at Rutgers turned into a life changing experience. “I was able to identify living poets,” he said. “Not people shouting on street corners or selling books on a table on the sidewalk. So it gave me permission to write poetry.”

Once Pardlo decided to pursue poetry he was courted by many MFA programs, finally settling on NYU. The mainstay of the MFA program, the workshop, is still one of his favorite parts of academia. “I look for opportunities to get in the workshop setting,” he said. Propelling Pardlo to lead workshops for both the PEN America Center and the Calabash Writer’s workshop in Kingston, Jamaica.

An MFA can only get one so far, hence Pardlo attended CUNY for his PhD. Although a PhD is required for tenure at CUNY, Pardlo found another way to get around that. “I was the first person of color to ever win the American Poetry Review’s Honickman Prize [in 2007 for his book Totem],” he said.

If Pardlo was eligible for tenure how did he find his way to GW? “I did not want to teach freshman composition. I felt I would be most valuable teaching in poetry,” he said. “So I look for an institution that agreed with me.” And as you can guess, GW was that institution.

Pardlo’s expectations have been exceeded by GW. He is enthused about being in DC during the Obama Administration. He quotes Shelley, “Poets are the unacknowledged legislators of the world.” Mostly though he appreciates his ability to work on his own poetry as well as teach. “GW is a research institution. They value professors who actually are working in their field,” he said.

What type of poetry does Pardlo write though? Even he cannot easily define it. “I try and stay out of whatever comfort zone I am able to identify.” He does admit to some consistency however, “I love lush imagery and language we are maybe familiar with but somehow seems moving and striking,” he said. He particularly likes looking for surprising combinations, likening it to cooking. “It’s like how to make a hot dog haute cuisine,” he said.

However when he is not writing he has been impressed by the quality of the students he teaches. He said, “At CUNY students expect creative writing to be an easy course. Here students are eager. I find myself looking for more innovative challenging ways to teach.”

Although Pardlo has only been at GW for a few weeks he is already inspired. He said, “I expect to learn as much from students as I hope to teach them.”

Read one of Pardlo’s poems on the American Poetry Review website. Also look for his editorship in the Calloo Literary Journal. And of course, make sure to take one of his creative writing courses!

From the latest edition: Life, in verse By Jaime Ciavarra Poet Jane Shore is moved by ordinary moments. The GW professor of English captures life’s everyday details with lyrical language and colorful verse. When she drives her daughter to the hair salon or reminisces about a piece of furniture in her mother’s home, Shore finds…

This photo was photoshopped for this blog, but only because I took it with my cell phone last year. (It’s still a bit blurry, as you can see.) Remember the wall of Post-It Notes we had on the 7th floor of Rome Hall last year? Well, this is an authentic note that an anonymous student…

Along with eight other students, Rajiv Menon was awarded a George Gamow Undergraduate Research Fellowship. From the press release: Rajiv Menon, a junior from Kingwood, Texas, is a double-major in international affairs and English. Working with Judith Plotz, professor of English, he will spend the summer of 2009 completing research for the project: “Imagined Dravidistans:…