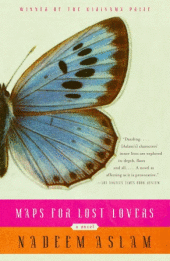 When I signed up for this course, I expected a contemporary British reading course, not too different than most literature courses that I have taken so far. Obviously, there was the difference of having Nadeem Aslam teach this course. However, I did not foresee a difference in the way we would discuss the literature – we would still look at gender, homosocial bonds, class struggles, and other important topics in contemporary literary theory. Only in this course, we would have a “real author” helping us dissect the texts. I approach literature from a critical standpoint, and in many ways, I assumed this was the best way to do so.

However, I am certain that not once in our four meetings did I hear of gender performance, Marxist structures, or any of these ideas that I have valued during my four years in this department. Rather, I heard about observations, emotions, and moments that seemed realistic. In many ways, I would say this course was nothing like my expectations. We did read contemporary British fiction, but even within the genre, Mr. Aslam chose writers who helped to stretch rather than solidify what it means to be British. Our texts seemed to have no real coherency except that they were from people with British passports. Naturally, the course would prove just the opposite – I was just looking at these texts from the wrong angle.

Mr. Aslam’s focus throughout this course was not on the theoretical underpinnings of the texts, but rather on how a novel comes together. These texts, therefore, each added their own part to our overall discussion. He helped us see how a writer looks at the world around him/her and then commits it to the page. I think that the most impressive part of his instruction was that he believed that all of us had a chance to write a novel. Throughout the class, he told us to always keep a journal of phrases, lines, and descriptions that will one day find their place in our own novels, those phrases and lines that just popped into our heads as we observed our world.

Mr. Aslam also gave us the tools for looking at our world with a bit more of a writer’s eye. He often explained situations or observations that he had added to his own novels. Throughout our meetings, he would pick out the lines or phrases from the current text that he found most poignant, phrases that I normally ignore because I am searching for a theoretical framework. Mr. Aslam’s course gave me a chance to revisit literature and remember why I became an English major: because I love good writing. Each week we read the first one hundred pages of a novel and then discussed what made this novel a good piece of fiction. It was strange initially to have to consider if I liked the novels. I was once told in a course (while abroad) that no one cares if I like the novel, and mentioning it makes me a bad scholar. While I now realize this view is extreme, I think often in modern criticism we ignore writing. In fact, in Out of Sheer Rage, Dyer claims that criticism and English departments kill literature rather than preserving it. Obviously, he is also a bit harsh, but his point is well taken, and I think Mr. Aslam’s course helped me understand what Dyer means. This course helped me to look at the novels as more than part of some grand social discourse, as original works with their own unique history, story, and motivation.

Each of our three novels helped us look at three essential aspects of a novel’s description. Warner’s Morvern Callar was a wonderful example of how a writer must capture the smallest of details. Mr. Aslam praised Warner’s ability to remember the most pedestrian of actions, for instance that when someone rolls dough he/she moves the rolling pin in two different angles. So while I was focused on the homosocial bonds between Lanna and Morvern, Mr. Aslam was looking at how Warner did a wonderful job describing Morvern’s opening of presents. Eventually, through our discussion, I learned how to better look on multiple levels of writing. Dyer’s Out of Sheer Rage was an exercise in ideas, his novel seemed to eschew details for ranting passages. What I found most intriguing about this novel was how much I identified with Dyer’s style, partially because I was more attuned to what he was attempting. Mr. Aslam helped us to understand how these ideas contributed to creating a cohesive whole, and even more so, how even in preferring ideas, Dyer still made wonderful use of visual details. Finally, Ishiguro’s An Artist of the Floating World worked on the levels of scene. As such, our discussion focused on how Ishiguro developed and built these scenes. Specifically, Mr. Aslam helped us to understand how Ishiguro creates Ono through his interactions with the world around him. Together these novels created an impression of how writers work, how they create fictional worlds visually, intellectually, and socially.

As someone who hopes to one day find himself working in criticism, I think this course helped me most to remember the fundamentals of literature and, in many ways, was a humbling experience. I have a better appreciation for the skill of writers like Warner, Dyer, and Ishiguro, an appreciation that I am more mindful of working on what is a highly critical and theoretical senior thesis, making me look to language just as much as theory.

Overall, I found the course to be engaging and invigorating in many ways. I have spent the last year and a half reading nothing but medieval and early modern poetry, so it was a nice refresher to get into good prose once again. Even more so, though, this course was a wonderful learning experience because Mr. Aslam’s perspective as a writer added much to these books. If anything, I would say that I took away a lot and only wish the course had been longer.

GW English’s fabulous alumni continue to win award and make headlines. The latest: GW PhD Dolen Perkins-Valdez is this recipient of a First Novelist Award given by the Black Caucus of the American Library Association. The award, which was presented at the Association’s recent San Diego meeting, honors Perkins-Valdez for Wench (HarperCollins, 2010). According to…

Well we know what the entire English Department was doing yesterday. Due to the 13 comments I got on the Facebook post yesterday asking for famous literary quotes about snow/despair I found myself googling like mad today to appease you all. So without further ado, here is what this week’s madness reminds you of: Joseph…

Our new departmental website is being rolled out as I write. At the moment, it’s a work in progress, so please be patient with us as the kinks get worked out and various aspects of the website become operational. But we’re thrilled to be the first humanities department in Columbian College to have our website…

E.L. Doctorow reading at Funger Hall last week. E.L. Doctorow’s campus visit and reading last week were a high point of the spring semester for the English Department. Doctorow visited Prof. Faye Moskowitz’s Jewish Literature Live class in the morning, talking to students about his novel The Book of Daniel, and then gave a public…