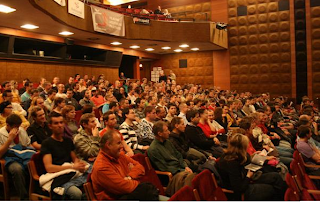 Attendees at this year’s Mezipatra (which means “mezzanine” in Czech).
Can you find any of the GWU students?

Once again this year, GWU students had the unique opportunity to join Prof. Robert McRuer in attending Mezipatra, the Czech Queer Film Festival

The students in the class will be presenting their work at a one-day symposium Saturday, December 11, in Rome 204 in Prague as part of their ENGL 179: Transnational Queer Film Studies course.(801 22nd Street NW). Everyone is welcome!

Here is a description and the schedule of presentations:

This semester, students in English 179 (along with our counterparts at Charles University in Prague) have worked through a range of issues connected to queer theory, transnational theory, and film studies. From November 10-17, we combined our class with students in Prague to attend together the latest Mezipatra: Czech Queer Film Festival. On December 11, students in the course will present their work on three panels with five presentations each. Come and hear the ten-minute presentations and join in the conversation following. Feel free to attend any or all of the three panels. Free and open to the public as all good events should be!

Hallie Swan, “Turning Inside Out: The Fight to Sustain Gender Identity in the Wake of Exposure”

Whitney Kasle, “The Dominant Subordination: A Study of Mainstream Influence on Alternative Film”

Zachary Rice, “The Queering of Time and Space in The Bubble”

Chad Latawiec, “Prague as a Center for Gay Tourism”

Colin MacDonald, “The Art of Oppression: Portrayals of Authoritarian Governments in Queer Cinema”

Chloe Rome, “The Kids are All Right, and So Are the Parents: The Homonormative Construction of Family”

Megan Davison, “Does Disability Fit into the 29 Dimensions of Compatibility? The Implications of the Disabled Body and Its Relationship with Society”

For alumna, Katy DiSavino, being a playwright was not really a choice, it was in her blood. As the daughter of parents who own a theater in Lancaster, Pennsylvania, DiSavino has been acting since she was child. Determined to breakout of theater once she went to GW, DiSavino sat her parents down for the long…

Thomas Mallon with Daniel Day-Lewis On Saturday, October 7, Professor Thomas Mallon, Director of Creative Writing in the Department of English, was inducted into the American Academy of Arts and Sciences.  Professor Mallon is the author of eight novels, including Watergate: A Novel. last weekend. He is the third member of George Washington University’s Faculty, and…

From the latest By George! New GW Institute Brings Together Scholars in Medieval, Early Modern Studies Jeffrey J. Cohen, chair of GW’s English Department, leads the University’s Medieval and Early Modern Studies Institute. By Julia Parmley Faculty across departments in GW’s Columbian College of Arts and Sciences have been individually engaged in medieval and early…

If you intend to attend the Touching the Past symposium (the inaugural event of the GW Medieval and Early Modern Studies Institute) on Friday November 7, would you let us know that you plan to come? You can email Lowell Duckert (lduckert@gwu.edu) or me (jjcohen@gwu.edu). We’d like to ensure that our room is large enough…