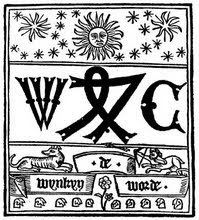 We are honored to have Sarah Werner of the Folger Shakespeare Library teaching a seminar for us this coming spring. Though the seminar is offered at the graduate level, we are opening five spots in the class to undergraduate English majors who are interested in the subject and who would like to do some advanced work in Renaissance literature.

If you are would like to take the course, please email me a brief paragraph of interest as soon as possible (jjcohen@gwu.edu). This is a unique opportunity for anyone interested in the contemporary study of Shakespeare and Renaissance drama. I hope it will appeal to some of you.

By the way, Professor Warner runs a terrific blog about early modern books and culture.

The aim of this seminar is to explore the relationships between Renaissance drama and performance. The and here is crucial—we will not be studying the plays in performance or performances of the plays, nor we will be considering whether performances reveal plays or whether plays contain performances. Rather, we will be taking a multiplicity of approaches to explore how the study of performance and the study of Renaissance drama work together in order to create new understanding of each. Reading Renaissance plays (those of Shakespeare as well as those of his contemporaries) alongside theories of performance, audience studies, production histories, and textual scholarship, we will explore different arenas where drama and performance come together: script, performer, audience, theatre, archives, memory. How, for instance, does actor training affect the meanings an audience might find in a performance? Is it possible to speak of “the audience” when different spectators react in different ways? Where might traces of past performances and possible future performances be located in an edition of a play? Can we recover a sense of early modern theatrical practices from reading the plays? What are the myriad elements that work together (or against each other) to make up a performance of a Renaissance play?

Possible play texts include The Revengers Tragedy, Henry V, Spanish Tragedy, As You Like It, The Taming of the Shrew, Volpone, and Knight of the Burning Pestle. We will read modern scholarship and theories about performance by W.B. Worthen, Barbara Hodgdon, Bridget Escolme, Robert Shaughnessy, and Courtney Lehmann. And we will see some stage and film performances, probably the Shakespeare Theatre Company’s production of Henry V, Synetic’s Antony and Cleopatra, and Alex Cox’s film of Revengers Tragedy. Students should be prepared to write frequent brief position papers as well as a longer research paper.

Save the date! On Friday October 23 at 5 PM, Rosemarie Garland-Thomson will deliver the inaugural GW English Distinguished Lecture in Literary and Cultural Studies. Professor Garland-Thomson is a founder of Disability Studies, an interdisciplinary approach to literature and culture that examines (among many other things) how the normal is created, and who is excluded…

Reflection on Suhayl Saadi Course Contemporary Literature Sadaf Padder As soon I received news of another author being brought to campus as a GW-British Council Writer in Residence, I jumped at the opportunity to be a participant of the course. I had heard of the Nadeem Aslam course last year too late to sign up…

From the blog Online Learning Insights Prof. Margaret Soltan, known to students as a teacher of Don DeLillo, postmodernism, and aesthetics, is the first GW professor to participate in a MOOC (Massive Online Open Course). Now her work with Udemy.com has been featured in the Chronicle of Higher Education. Read about Prof. Soltan’s poetry course–which…