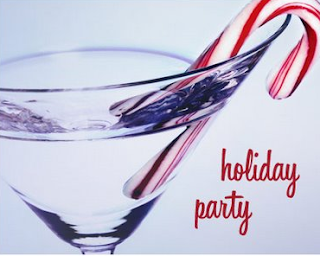 The English Department had its gala Festivus event yesterday afternoon, and, no, we did not have peppermint martinis. In fact, the image above is there because I neglected to take any photos of the festivities. I was far too busy partaking of the delicious spread provided by my colleagues and laughing over the Department Trivia contest organized by Department Secretary Linda Terry and inspired by our work-study student Kelsey Van Hook.

Here are some of the interesting trivia tidbits we learned:

Prof. David McAleavey (who has slept on benches in Germany and Denmark) was the winner of the Trivia Contest, and received a $25 gift card from Giant.

Thank you to Creative Writing faculty member (and one-time actor in a Steve McQueen movie) Lisa Page for getting the ball rolling, and thanks to Linda (who received a gingerbread man at a White House Christmas event when she was ten) and Office Manager Constance Kibler (who saw Jimi Hendrix play in the Washington Hilton Hotel; read the set list here!) for organizing the excellent trivia game. (By the way, did you know that our work-study student Kelsey was once told she was a good actor by Tom Cruise?!)

This just in from Prof. Holly Dugan, describing her fascinating summer 2010 English course: This summer, I’ll be teaching a course on early English drama that culminates with a week abroad, exploring Edinburgh, Scotland and Yorkshire, England and watching the 2010 production of the York mystery plays. I’m writing here in the hopes that I…

We are very pleased to have Rajiv Menon join us this fall as the second Communications Liaison, an undergraduate internship position charged with disseminating news about the department and fostering a better sense of community among our majors. I asked Rajiv to compose a short paragraph of introduction, and this is what he offered: I’m…

English major Jessica Chace recently wrote to ask what folks in the English department were reading this summer, so we did a quick poll. Here are reports from far-flung students and faculty:  Jessica Chace is finishing up The Memory of Running by Ron McLarty. “The title is a bit of misnomer,” she writes, “–it’s actually…