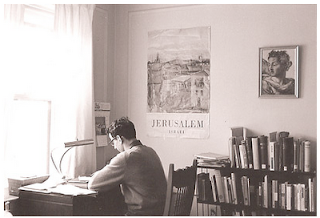 The English Department welcomes Ariel Sabar, author of the prize-winning My Father’s Paradise: A Son’s Search for His Family’s Past, for a reading Tuesday night, April 13, at 7 p.m. in the Marvin Center Grand Ballroom. A Washingtonian, Sabar is a seasoned journalist. He covered the 2008 presidential campaigns for The Christian Science Monitor, and has published in the New York Times, the Washington Monthly, and many other publications.

Sabar brings his journalist’s skill for fact-finding and storytelling to My Father’s Paradise, his first book, which won the National Book Critics Circle Award for Autobiography, as well as the Roda Book Award, given by the Church and Synagogue Library Association once every three years. My Father’s Praradise tells the fascinating story of Sabar’s father, a Kurdish Jew who grew up in Iraq as the member of a small population speaking the ancient language of Aramaic. When Sabar’s father was a child, his family emigrated to Israel, escaping persecution and increasing violence in their native country. Sabar’s father eventually became a linguist, one of the few scholars in the world capable of translating among Aramaic, Hebrew, and English.

Ariel Sabar grew up in California, where his father was a professor of Near Eastern languages. His autobiography also details his own struggles to understand his family and come to terms with his immigrant father’s “strangeness.”

We hope to see many of you there for this last reading of this spring’s Jewish Literature Live class taught by Prof. Faye Moskowitz and generously supported by English department alumnus and GW Trustee David Bruce Smith.

English major Jessica Chace recently wrote to ask what folks in the English department were reading this summer, so we did a quick poll. Here are reports from far-flung students and faculty:  Jessica Chace is finishing up The Memory of Running by Ron McLarty. “The title is a bit of misnomer,” she writes, “–it’s actually…

The GW English Department offers a five-year dual degree BA/MA program. Students complete their Bachelor of Arts at the end of four years of undergraduate study, and their Masters after one additional year. By undertaking graduate coursework during senior year, students complete the MA one year faster than they otherwise could. The first step to…

The last Medieval and Early Modern Seminar of the semester will be held on Friday, November 30th from 9-11 AM in Rome 771. Jehangir Malegam (GW History) will be presenting his paper entitled: No Peace for the Wicked: Conflicting Visions of Peacemaking in an Eleventh-Century Monastic Narrative As usual, please RSVP to me to receive…

A Special Alumni EventPlease join the English Department for a panel discussion on “Literature in a Global Age,” the past and future of writing in English. A panel of authors and critics will lead a lively discussion of literature familiar and new, exploring the art that happens when cultures meet — and clash. The panel…

By special arrangement with the folks organizing Toni Morrison’s upcoming campus visit (thank you, Prof. Evelyn Schreiber!), the English department has obtained several seats for undergraduates to attend a dinner with Prof. Morrison before her talk at Lisner Auditorium on Monday 9/21 at 8 p.m. This dinner is by invitation only and is for fewer…