Alexi LeFevre is a 2005 alum of The George Washington University. Although he studied international affairs, he describes himself as someone who has had a lifelong passion for creative writing.  At GW, he pursued that passion in a formal setting for the first time.
In the spring of 2003, Alexi took the Honors Creative Writing course, which at that time was taught by acclaimed author Vikram Chandra (now a faculty member at UC – Berkeley).  Alexi reports that he learned the value of peer review in this class.  Additionally, “It was in this class where I first learned that characters matter, that their lives and voices, their passions and hatreds, must come through to the reader. It was in this class where I absorbed the importance of structure, of tone, of voice, and of point-of-view. While the seed of creative writing had always been there, the Honors Creative Writing course at GWU watered it amply.”
Since then, Alexi has written numerous short stories and manuscripts, inspired by his travels around the world. The Pilgrims of Saint Sebastian is his first novel and can be found at his web page here. 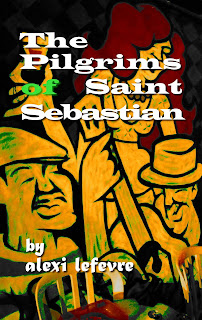 GW English alumnae Jennifer Nelson recently published the anthology Deaf American Prose with Gallaudet colleague Kristen Harmon.  The collection is the first in a series called the Gallaudet Deaf Literature Series and promises to be a rich perspective to explore.  Professor Harmon is an English professor and on loan as the Center Manager of Impact on Education and Disseminations for VL2, a…

http://lunchbuddiesplus.files.wordpress.com/2013/08/backtoschool.gif Now that we’re all settled in for the semester, and following the great turnout for the Inaugural Digital Humanities/Dean’s Scholar in Shakespeare lecture (delivered by Michael Witmore, director of the Folger Shakespeare Library) we want to let you know a bit more about this blog and the upcoming semester. Samantha Yakas with Bruce Jay…

Professor Jennifer Chang is on the roster for the Library of Congress reading series at the beginning of December!  Join the conversation about poetry and teenagers.  Details below. Wednesday, December 2, 6:30 PM TEENS AND POETRY FOR THE  21ST CENTURY Poets Jennifer Chang and Mark McMorris read selections of Please Excuse This Poem: 100 New Poets for the Next Generation along…

We’re happy to share Jane Shore’s new poem, “This One,” now in both the print and online version of the current issue of The New Yorker! You can access the poem at The New Yorker’s website here. Share on FacebookTweet