GW English alumnae Jennifer Nelson recently published the anthology Deaf American Prose with Gallaudet colleague Kristen Harmon.  The collection is the first in a series called the Gallaudet Deaf Literature Series and promises to be a rich perspective to explore. 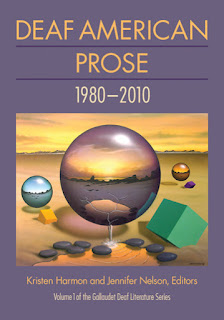 Professor Harmon is an English professor and on loan as the Center Manager of Impact on Education and Disseminations for VL2, a program at Gallaudet that focuses on visual language and visual learning, and Professor Nelson specializes in multiple fields of literature, including ASL Literature.


The anthology is a companion piece to John Lee Clark’s Deaf American Poetry and so Nelson and Harmon used multiple forms of prose, from narratives to fiction. Professor Harmon shared, “Our subtitle for the work is Deaf Papers, and we meant this to include all the possible connotations of this– as documentation, as an assertion of equal rights, as a response, as a collection of usually overlooked or unseen ‘papers,’ as a sequence of reports in English, as an insider’s report, as a response to stereotypes and flattening representations of deaf people in mainstream literature in mainstream literature and media, and finally, as a recording of deaf lives on paper.”

When advertising the book, Gallaudet Press says, “The rising Deaf writers presented here further distinguish the first volume in this new series by thinking in terms of what they can bring to English, not what English can bring to them.”

As two professors with intimate connections to languages that are not spoken but communicated visually, I asked what doors Professors Harmon and Nelson thought this new series could open for English.

Harmon responded, “English as a language and as a literature contains the history of its interactions with other peoples and other languages, you could look at it as containing a series of lower case ‘englishes’ that assert a different and resistant perspective on identity and language. We wanted to see tale of the different ‘englishes.’ We also wanted Deaf ASL/English bilingual writers to enter the discussion and to take risks with their own writing of themselves within community and language. Finally, because so many of us grow up with the message that there is only one way, one language (e.g. spoken English made accessible through technology and speech therapy), it is empowering to consider the ways in which being bilingual, existing within and between two languages is a source of creativity and multiplicity.”


Harmon passionately reminds us that too often spoken English is the dominant voice in English circles, but that many other voices are out there. Many voices with many promises with new ideas to explore and discover. So snuggle up with a copy of Deaf American Prose this winter break!

The English department is very pleased to introduce readers of this blog to our newest faculty member, Dr. Daniel DeWispelare, who will be joining us as an assistant professor in September. Prof. DeWispelare received his PhD from the University of Pennsylvania, and does research primarily in the British nineteenth century, with a focus on Romanticism,…

Tawnya Ravy Graduate student Tawnya Ravy has won a prestigious Summer Research Fellowship for 2013 from the Northeast Modern Languages Association.  This fellowship will allow her to travel to Emory University in Atlanta to work in the newly opened Salman Rushdie Archive at the Manuscripts, Archives, and Rare Books Library, and to conduct critical research for…

Meet our first Alumni Spotlight of the year: Jennifer Cheng! Jennifer studies English because it feels like a way for her to connect with people and stories she would otherwise be unable to access, thereby helping her connect more meaningfully with those around her.  Jennifer Cheng received her Masters in Teaching through the NYU Teacher…