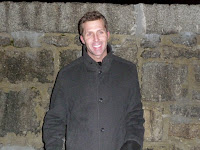 Jason Fillardi, who will be teaching a course on screenwriting next semester, provides the GW English blog with this brief biography:
“Jason Filardi grew up in Mystic, Connecticut and now resides in Los Angeles, California. But before moving to LA, he spent four of the best years of his life studying English at the George Washington University. After graduating in 1993, he packed up his car and headed west to pursue his dream of becoming a screenwriter.

Jason made his debut in Hollywood with the box office hit BRINGING DOWN THE HOUSE which starred Steve Martin and Queen Latifah. That film went on to become one of the highest grossing comedies of 2003.

Since then Jason has become one of the industries go to screenwriters. He has done rewrites and polishes on a variety of high profile projects including THE PACIFIER starring Vin Diesel, EIGHT BELOW starring Paul Walker, the Tim Allen, Martin Lawrence, and John Travolta ensemble comedy WILD HOGS and most recently the Disney hit BEVERLY HILLS CHIHUAUA.

Jason currently is writing the remake of the classic Cary Grant comedy TOPPER which has Steve Martin attached to star. He’s also penning a comedy for Lionsgate Films, a comedy for Disney and his original comedy, 17 AGAIN, opens nationwide on April 17, 2009. Zac Efron of Disney’s HIGH SCHOOL MUSICAL and HAIRSPRAY fame stars in the film.

Now Jason is getting the opportunity to realize another dream…teaching. He will be coming back to his beloved University for the spring 2009 semester to share his knowledge and experience of screenwriting with interested GW students.”

Clearly, GW students have a lot to look forward to next semester!

We will have two very special versions of English 182 this coming spring. More information will follow here, but for the time being, here is the application. Applications may be submitted until the course roster has been completed, but we urge students to turn in their applications by Nov. 7 if at all possible. We…

Our former World Literature Writer in Residence emails that her son Zuko aka “King Zuko” was born ten months ago. Congratulations, Nokuthula! Share on FacebookTweet

Come experience the work of an award-winning writer who grew up in a traditional community in Jerusalem. Pearl Abraham grew up in Jerusalem during the 1960s; her family later moved between Hasidic communities in Jerusalem and New York. Her first novel, The Romance Reader, won praise from the New York Times, Washington Post, Publishers Weekly,…