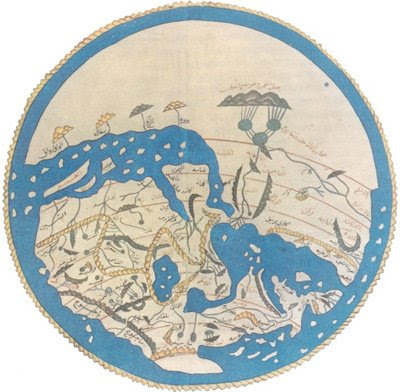 Much great English literature turns out not to be so English after all: the action of the epic Beowulf unfolds in Scandinavia; King Arthur was a Welsh king before he was an English one; Shakespeare’s Tempest takes place on an island in the Mediterranean, but the play is also about the colonization of the New World.

Class meets in a lecture format every Monday (11:10-12:25), and in smaller sections each Wednesday.

This is a challenging course that satisfies the WID requirement.

“Myths of Britain” is open to all students regardless of major, provided they are willing to work hard at their writing, to hone their close reading skills, and to learn how wide the world really was in the medieval and early modern periods.
[South-oriented map of the world drawn by the Moroccan cartographer al-Idrisi for King Roger of Sicily, 1154: from here]

We love having our accomplishments and our ambitions publicized. This kind of story, though, we would be happy to do without. Share on FacebookTweet

Dr. Aryeh Lev Stollman, who kicks off this year’s Jewish Literature Live readings, is one of those remarkable polymaths: an award-winning fiction writer whose “day job” is as a neuroradiologist at the Mount Sinai Medical Center in New York City.    His first novel, From the Far Euphrates, was an LA Times Book Review…

If you want to keep up via Facebook with all things related to the Edward P. Jones residency, join this group. And in case you’ve only recently emerged from a cave on a deserted island and/or have just been released after long abduction by alien beings of uncertain but unwholesome intent, the English Department at…

We are fortunate to have a renowned scholar of theory, performance studies and Latino literature join us in the fall semester. José Muñoz is our second Wang Visiting Professor in Contemporary English Literature in GW’s Department of English. He will be teaching two courses, both open to all qualified undergraduates. Professor Muñoz is a charismatic…