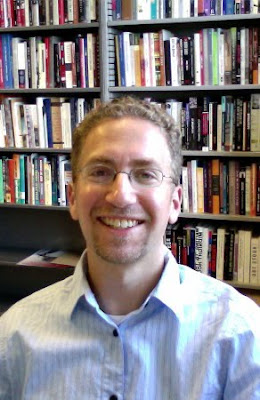 I’m pleased to report that I write you from my new office at UC Berkeley, where I’ve just begun a tenure track position in comparative ethnic studies. As you might imagine, I’m thrilled—and deeply humbled—by the opportunity to work in such a generative atmosphere.

I was hired in part because of my interest in what have often appeared as new forms of racialization haunting both foreign and domestic spaces in the wake of 9/11. When asked to narrate how and where such an interest emerged, I often turn to my experience at GW, where I’d started as a grad student in the fall of 2001, and was taking Bob McRuer’s seminar on literary theory and Kavita Daiya’s seminar on postcoloniality. A quirk of scheduling had us reading selections from Frantz Fanon in both classes early on in the semester—precisely the moment when questions of race and imperial power were smoldering in the embers on the other side of the Potomac and the new blast walls erected around the State Department. I distinctly remember the care both Bob and Kavita showed in helping us think race and gender, violence and liberation, religion and secularity, modernity and coloniality, not to mention philosophical questions about the shape of the human and epistemological questions about the legibility of decolonial knowledge production. Couple that with searching discussions on the work scholars can do while on shifting global terrain and my research trajectory quickly emerged, one that has only become more complicated, more exciting, more pressing in the age of Obama.

After two wonderful years in Foggy Bottom—connecting with faculty in American Studies and the Human Sciences as well as in the English Department—I moved to the PhD program in English at the University of Washington in Seattle. With amazing mentors in both locales I was able to write an interdisciplinary dissertation on the question of Palestine and U.S. imperial culture and connect with an inspiring cohort of scholars.

And now I’m here, daunted, nervous, writing you when I probably should be revising my syllabi for the fall, not to mention that pesky book manuscript. Wishing you all the best for a new semester! Oh, and drop me a line anytime: kpfeldman@berkeley.edu.

Congratulations Keith and best of luck at Berkeley from your friends in the GW English Department!

Allegra Goodman Novelist Allegra Goodman will be reading at the Marvin Center Amptitheater at 7 p.m. on Thursday as a part of Prof. Faye Moskowitz’s Jewish Literature Live course. The class explores the works of a variety of contemporary Jewish-American authors and features them in class visits and public readings. Heralded as a “modern-day Jane…

Crip Theory: Cultural Signs of Queerness and Disability, the most recent book by Associate Professor of English Robert McRuer, has been honored as a nominee for a 2007 Lamba Literary Foundation Award. The leading organization for LGBT literature, the Lambda Literary Foundation has been running its awards program for nearly twenty years. The foundation’s mission…

From the University of Nebraska Press website: Willa Cather’s twelfth and final novel, Sapphira and the Slave Girl, is her most intense fictional engagement with political and personal conflict. Set in Cather’s Virginia birthplace in 1856, the novel draws on family and local history and the escalating conflicts of the last years of slavery—conflicts in…

This upcoming spring, two GW English PhD candidates will be teaching a series of unique classes that will be of particular interest to our undergrads. With registration just around the corner, now is a great time to learn about the special topics these classes cover! Maureen Kentoff will be teaching ENGL 3840.11- Women, Place & Time…