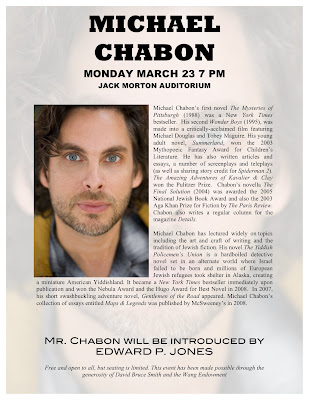 Michael Chabon’s first novel The Mysteries of Pittsburgh (1988) was a New York Times bestseller. His second Wonder Boys (1995), was made into a critically-acclaimed film featuring Michael Douglas and Tobey Maguire. His young adult novel, Summerland, won the 2003 Mythopoeic Fantasy Award for Children’s Literature. He has also written articles and essays, a number of screenplays and teleplays (as well as sharing story credit for Spiderman 2). The Amazing Adventures of Kavalier & Clay won the Pulitzer Prize. Chabon’s novella The Final Solution (2004) was awarded the 2005 National Jewish Book Award and also the 2003 Aga Khan Prize for Fiction by The Paris Review. Chabon also writes a regular column for the magazine Details.

Michael Chabon has lectured widely on topics including the art and craft of writing and the tradition of Jewish fiction. His novel The Yiddish Policemen’s Union is a hardboiled detective novel set in an alternate world where Israel failed to be born and millions of European Jewish refugees took shelter in Alaska, creating a miniature American Yiddishland. It became a New York Times bestseller immediately upon publication and won the Nebula Award and the Hugo Award for Best Novel in 2008. In 2007, his short swashbuckling adventure novel, Gentlemen of the Road appeared. Michael Chabon’s collection of essays entitled Maps & Legends was published by McSweeney’s in 2008.

Mr. Chabon will be introduced by EDWARD P. JONES

Free and open to all, but seating is limited. This event has been made possible through the generosity of David Bruce Smith and the Wang Endowment

Medieval Drama in Early England(ENG 172.60)The course examines early English drama through the lens of cultural adaptation and will culminate with a trip to York, England to watch a modern production of medieval mystery plays. Most of us have had some encounter with early English drama through the works of Shakespeare. Medieval drama, in comparison,…

Former GW creative writer professor Jodi Bolz. UPDATE 5/22/12 at 11:48 a.m.:  Tonight’s reading by Jodi Bolz is at 6:30 p.m. Jodi Bolz, who taught in our creative writing program for more than 20 years, will be reading from her work at the Martin Luther King Jr. branch of the DC Public Library Tuesday, May…

From the latest edition: Life, in verse By Jaime Ciavarra Poet Jane Shore is moved by ordinary moments. The GW professor of English captures life’s everyday details with lyrical language and colorful verse. When she drives her daughter to the hair salon or reminisces about a piece of furniture in her mother’s home, Shore finds…

Ann Romines writes of a recent trip to Quebec to address a prestigious gathering of scholars: Novelist Willa Cather visited Quebec City for the first time in 1928, passing through on the way to her summer home on Grand Manan Island. When her companion, Edith Lewis, came down with the flu, their overnight stay stretched…

Starting this afternoon, thousands of writers will be gathering in DC for the annual conference of the Associated Writers & Writing Programs, headquartered this year at the Marriott Wardman Park in Woodley Park. The conference features readings from scores of writers, as well as opportunities for writers to network with editors, publishers, and each other….

Professor Margaret Soltan, via Columbia News Service, talking about Gchat and professor-student interaction: For Margaret Soltan, an English professor at George Washington University, Gchat is wonderful for connecting with students outside of class. Over the years, the tech-savvy teacher has accumulated dozens of students on her Gchat list, and she chats with them frequently. While…