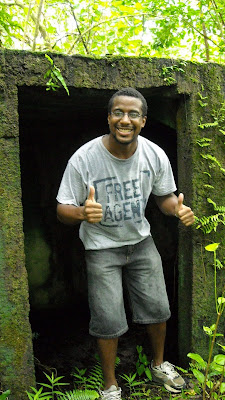 I was so pleased to receive an email from Michael Bonett, Jr., my former student and advisee in the English Department. He writes:

After I graduated from George Washington University, I worked in Maryland for a year. During this time, I got published on my birthday in Mindflights magazine. I left to be a Peace Corps Volunteer in Georgia in June of 2008. My assignment in that Eastern European country was to be an English teacher. When the conflict with Russia broke out, my fellow volunteers and I were evacuated to Armenia. I stayed there until I transferred to Peace Corps: Micronesia in September of 2008.

I currently teach English to ninth graders on Kosrae, known as the “Island of the Sleeping Lady” because of the shape of its beautiful mountains. Kosrae is most famous for its singing. In particular, its Christmas marching event is world-renowned. I had the pleasure of participating in the event in my own village and it was amazing. In the village of Lelu are the ruins of a basalt fortress that dates back to 1400 A.D., where the ancient Kosraean kings lived. There are numerous Japanese WWII sites, including a series of tunnels in Mt. Ohma.

To say that my post-GW experience has been interesting would be an understatement. I’ve been to Georgian feasts known as supras, attended a wrestling festival, and played chess with the T’bilisi champion. I’ve sung informally in Gerhard Monastery in Armenia and on television during Kosraean Thanksgiving and Christmas celebrations. I’ve attended Georgian Orthodox, Armenian Apostolic, and Kosraean Protestant church services. My job is excellent and the people I work with are relaxed and easygoing. Overall, my education at GW has provided me with opportunities that have been far more exciting than I’ve ever imagined.

Thanks for writing us Michael — and we wish you all the best in the adventures ahead!

The English Department is thinking of introducing a program through which a select number of English majors could earn a BA at the end of the senior year, then stay at GW for an additional year of study and to gain an MA. This program would enable students to earn an MA a year faster…

So you’re wondering what to do before the English Department’s BIG READ on February 11 at 4 p.m. in Rome 771? (That event, as you recall, will give you an exclusive audience with the fabulously witty and talented Howard Jacobson, known to Brits as a novelist, newspaper columnist, broadcaster, and all-around public intellectual, and yet…

Renowned British novelist Howard Jacobson will be our third GW-British Council Writer in Residence during February 2010. Like Suhayl Saadi and Nadeem Aslam before him, Mr. Jacobson will read four works of his choosing with students and discuss them informally over four Tuesday nights. Upon completion of the course students will turn in 5 pages…

Alumna Beth Lattin (’08) has a piece in Forbes about graduate school, debt, and planning for the future in uncertain economic times. Check it out! Share on FacebookTweet