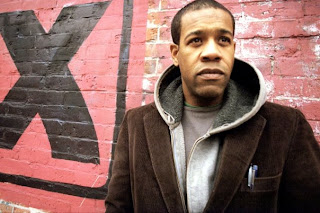 Someone once told Greg Pardlo, GW’s newest creative writing professor and poet, that academia could ruin his poetry. After Thursday night’s poetry reading however, Pardlo should have no fear that he is losing his talent, if anything, his talent is increasing.

For a man with many awards to his name, Pardlo is incredibly humorous and humble. He made many playful shout outs to the audience from faculty (“You knew that line was coming Faye Moskowitz!”) to students (“And to my homies in the English department, Sasha and Justin.”) This also means that Pardlo is very open in discussing what actually inspires his poetry too.

“Each project has a certain obsession that guides it,” he said. For his book Totem this obsession was the painterly art. “I wished I could be a painter,” he said. “So it was the intersection between painters and poets.” This lead to a reading of his poem on a bar fight with Jackson Pollack called, “Title It Shotgun Wound” to a the story of a tryst between artists, Georgia O’Keefe and writer Jean Toomer, titled “Restoring O’Keefe.”

Pardlo garners his inspiration from many sources, but he emphasized that the typical student excuse “nothing ever happened to me, I grew up in a suburb” does not work. “You have to find something,” he said. “Look, I grew up in the suburbs too, but I had never written about the suburbs. So I tried to find passion and meaning in the suburbs.” This thought process culminated in a poem aptly titled, “Suburban Passional.”

At this point in the reading Pardlo had reached his current poems written during his time as an academic. Those who doubted his ability to meld all texts and contexts into poetry as an academic were instantly proved wrong. He said, “My new poetry is about exploring my life or one’s life in texts. All of you English majors understand that the songs we listen to, the movies we watch, the books we read, are texts.” One of Pardlo’s most distinctive poem explores a common phrase often found in slave narratives, “I was born.” In his poem, “Written By Himself” he catapults off of this theme to epic proportions, eventually landing him in the current issue of The American Poetry Review.

Pardlo is a poetic force to be reckoned with. GW is lucky to have him.

(readers of the post below may recognize that this year we are seeking a replacement for Maxine Clair, who had the gall to retire on us last year. Maxine is, of course, irreplaceable … but we will hope for the best).Assistant Professor of Creative Writing For appointment beginning in the fall of 2009, we seek…

We’re looking forward to greeting colleagues and friends from near and far for our fabulous Plotzfest conference in honor of Professor Emerita Judith Plotz on Friday. The fun begins at 10 am in the Marvin Center, Continental Ballroom, and continues throughout the day, with a culminating reception at 4 pm in Phillips 411. Please join…

On Thursday, Oct. 28 at 8 pm, the English department will host distinguished novelist Howard Norman reading from his latest and critically acclaimed work What Is Left the Daughter (Houghton Mifflin Harcourt). The latest in the department’s series of Jenny McKean Moore events, Norman’s reading will take place in the Marvin Center Amphitheater. The event…

Earlier this morning I directed your attention to one article from The Hatchet. Now let me call your attention to another, in which it is revealed that the chair of the Sociology Department is also a crime busting superhero. Note to all English Department faculty, students, and alumni: you will never read an article in…