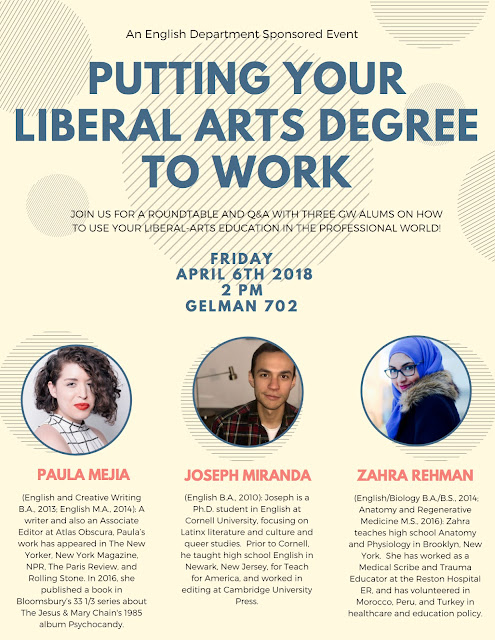 Join us for a roundtable and Q&A with three GW alums on how to use your Liberal Arts education in the professional World. It takes place on Friday, April 6th, at 2pm in Gelman 702.
Paula Mejia (English and Creative Writing B.A., 2013; English M.A., 2014): A writer and also an Associate Editor at Atlas Obscura, Paula’s work has appeared in The New Yorker, New York Magazine, NPR, The Paris Review, and Rolling Stone.  In 2016, she published a book in Bloomsbury’s 33 1/3 series about The Jesus & Mary Chain’s 1985 album Psychocandy.
Joseph Miranda (English B.A., 2010): Joseph is a Ph.D. student in English at Cornell University, focusing on Latinx literature and culture and queer studies.  Prior to Cornell, he taught high school English in Newark, New Jersey, for Teach for America, and worked in editing at Cambridge University Press.
Zahra Rehman (English/Biology B.A./B.S., 2014; Anatomy and Regenerative Medicine M.S., 2016): Zahra teaches high school Anatomy and Physiology in Brooklyn, New York.  She has worked as a Medical Scribe and Trauma Educator at the Reston Hospital ER, and has volunteered in Morocco, Peru, and Turkey in healthcare and education policy.

Please join EGSA this Friday, April 15, at 3 p.m. in Phil 629 for a candid discussion hour. Whether you are a Masters or Doctoral student, one of the central components of our work is producing a scholarly contribution in the form of a portfolio or dissertation. As we all know, this is never an easy…

The month long residency of South African writer Nokuthula Mazibuko has come to an end. The Embassy of South Africa hosted a valedictory reception Tuesday evening at the residence of the ambassador, Her Excellence Barbara Masekela. Nokuthula returns to South Africa today. We wish her the best, especially as she looks forward to the birth…

K. Tyler Christensen The final event in Contemporary LGBT Literature, following Jordy Rosenberg’s visit on April 22 (details here), is GW English’s own K. Tyler Christensen!  Join students in the class on April 28 at 7 PM for an evening with Tyler.  This is the final in a series of four “live” public events…

Poet Sally Wen Mao Reads April 24 Poet Sally Wen Mao treats words like clay.  She molds them into new ideas, even as they retain their  original meaning. Language is shaped and adapted in her hands.  She also plays with a variety of forms, including field notes, and travelogues. The results are original, ironic and…