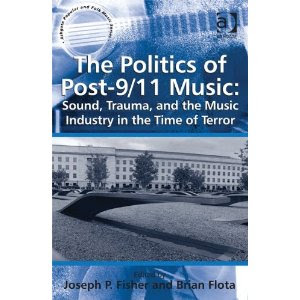 Congratulations to Joseph Fisher and Brian Flota on the publication of their co-edited volume The Politics of Post-9/11 Music, which will be available next month from Ashgate.

Seeking to extend discussions of 9/11 music beyond the acts typically associated with the September 11th attacks – U2, Toby Keith, The Dixie Chicks, Bruce Springsteen – this collection interrogates the politics of a variety of post-9/11 music scenes. Contributors add an aural dimension to what has been a visual conceptualization of this important moment in US history by articulating the role that lesser-known contemporary musicians have played – or have refused to play – in constructing a politics of protest in direct response to the trauma inflicted that day. Encouraging new conceptualizations of what constitutes “political music”, “The Politics of 9/11 Music” covers topics as diverse as the rise of Internet music distribution, Christian punk rock, rap music in the Obama era, and nostalgia for 1960s political activism.

Joe is currently a Learning Specialist with Disability Support Services at GW; Brian is Assistant Professor at Oklahoma State University. 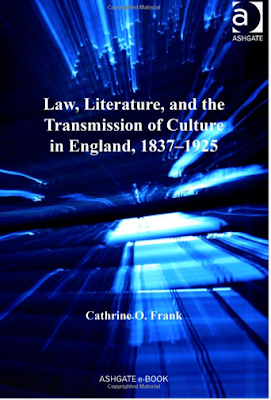 Also recently out from Ashgate: Law, Literature, and the Transmission of Culture in English 1837-1925 by Cathrine O. Frank, which originated as a PhD thesis under the direction of Prof. Jennifer Green-Lewis. Cathrine is Associate Professor, Department of English and Language Studies, at the University of New England.

Focusing on the last will and testament as a legal, literary, and cultural document, Cathrine O. Frank examines fiction of the Victorian and Edwardian eras alongside actual wills, legal manuals relating to their creation, case law regarding their administration, and contemporary accounts of ‘curious wills’ in periodicals. Her study begins with the Wills Act of 1837 and poses two basic questions: What picture of Victorian culture and personal subjectivity emerges from competing legal and literary narratives about the will, and how does the shift from realist to modernist representations of the will accentuate a growing divergence between law and literature? Frank’s examination of works by Emily Bronte, George Eliot, Charles Dickens, Wilkie Collins, Anthony Trollope, Samuel Butler, Arnold Bennett, John Galsworthy, and E.M. Forster reveals the shared rhetorical and cultural significance of the will in law and literature while also highlighting the competition between these discourses to structure a social order that emphasized self-determinism yet viewed individuals in relationship to the broader community. Her study contributes to our knowledge of the cultural significance of Victorian wills and creates intellectual bridges between the Victorian and Edwardian periods that will interest scholars from a variety of disciplines who are concerned with the laws, literature, and history of the nineteenth and early twentieth centuries.

Don’t miss your chance to study the history of the book at the Folger. Applications due March 10. More information here. Share on FacebookTweet

Reflection on the Class Contemporary Literature Nadeem Aslam This course was amazing. It provided a unique opportunity for me as an English major to learn about contemporary literature. I think that one of the things that I was lacking was an awareness of talented writers in my own time, especially international ones. The fact that…

E.L. Doctorow reading at Funger Hall last week. E.L. Doctorow’s campus visit and reading last week were a high point of the spring semester for the English Department. Doctorow visited Prof. Faye Moskowitz’s Jewish Literature Live class in the morning, talking to students about his novel The Book of Daniel, and then gave a public…

E.L. Doctorow will visit with students and then give a public reading Thursday. On April 7, the English Department will be hosting a reading by acclaimed writer E.L. Doctorow. The author of eleven novels, Doctorow has received numerous awards for his work, including the National Book Award, the National Book Critics Circle Award and the…