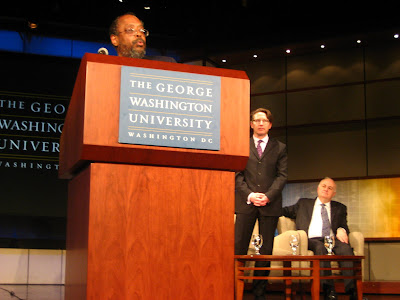 Jones began each excerpt by providing a brief history of the characters involved, to help the audience understand their relationships in the excerpt. Although primarily intended for those who had not read the novel, I also appreciated Jones’ notes as refreshing my memory of the text. Jones then took questions from the audience. It turns out that his opening line––“My soul’s often wondered how I got over…”––was based on a remembrance (or misremembrance) of a Negro spiritual, and it appealed to Jones so he placed it at the beginning of the book. The phrase was not intended to have larger significance in the text, although a case can be made that it does have larger significance in the text.

I will not catalogue the way in which Jones spoke, stood at the podium, or returned to his seat. Those details are best absorbed by attending a reading in person. I will mention one thing about the audience’s reaction to his reading. The audience laughed at Jones’ few intentionally-humorous phrases. On at least once occasion, however, the audience laughed at a sentence that would not be humorous when reading the entire novel, but which was humorous in the context of the excerpt:

“All this time Mann thought he was dealing with a white woman and he was never to know any different” (255).

I assume the majority of the audience laughed at the notion that anyone would be so foolish to mistake a white woman from a black woman. Except, by this point in the novel, Jones has fully established that Fern appears white; it is only her heritage that makes her “black.” In the context of the entire novel, Mann’s mistake is unremarkable; it is ordinary. And the ordinary is not intended to be humorous.

The English Department is pleased to announce one of the very first events of the new academic year.  On Friday, September 7, at 3:30 PM, former GW English professor and Director Emerita of the Folger Shakespeare Library, Gail Kern Paster, will deliver a lecture co-sponsored by the Dean’s Scholars in Shakespeare Program, directed by Alexa Alice…

January Edition of the Lowercase Reading Series: Tara Campbell, Koye Oyedeji, and Colin Dwyer I recently had the pleasure of attending the lowercase at Petworth Citizen, a monthly reading series hosted on the first Wednesday of every month by 826dc. The nonprofit was represented by Christina Mueller, a GWU English Major Alum, and Gus Caravalho,…