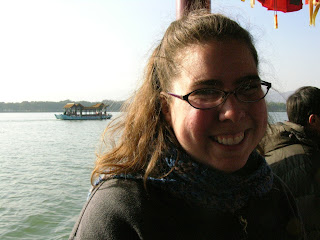 Caren Calamita graduated from the department in winter 2004 and is fondly remembered by her former professors. We caught up with her in China, from which she writes:

I’m currently living in Zhengzhou, Henan Province, China, with my fiancé, teaching English to middle school students at a boarding school of 3000 students. Living and working in China has been one of the most rewarding and challenging experiences of my life. Being in China has given me a completely different perspective on what it means to be American. In addition to working with students, all 1000 seventh graders, on their grammar and pronunciation I am also often the only foreigner they have met which means I often must dispel, or try to at least, the stereotypes they have about America and Americans. My teaching is as much a cultural exchange as it is about relaying textbook knowledge.

Coming to China was, and many times still is, a huge culture shock. Chinese is nearly impossible to learn if you don’t have the benefit of a classroom setting; many people still live in abject poverty; access to clean water or adequate food is also a problem for many people. Most people, especially those who live outside of Beijing, Shanghai, and Guangzhou, have only seen foreigners on TV so their curiosity (read: being stared and shouted at) is often difficult to deal with. For many Chinese people their jobs come before all else, even their family, and when we are asked, always at the last minute, to do something more for the school or have our teaching schedule changed, the differences between the cultures is very clear.

When we decided to come to China I knew these things, and more, would be something I would have to deal with. We are often asked why we didn’t go to one of the “Big Three” and it’s because we came to China to get to know Chinese people and China; if we wanted to hang out with Americans all the time we would have stayed in D.C. Granted, Zhengzhou’s not as developed as Beijing, Shanghai or Guangzhou but it still a city filled with wonderful people and really cool things to do and see. I still laugh when I say that to friends back in the States because it makes it sound like I’m living in a town of 30,000 people, not a city of 8 million.
Sometimes being one of the few representatives, there are only 700 foreigners in Zhengzhou, of “all things American” can be a bit of an overwhelming responsibility but it also has its rewards. We have become very good friends with a handful of the Chinese English teachers, some of our students and the owners of the one of local restaurant we frequent. It is these relationships that make the difficult days, being homesick unsure how to cope with “cultural” differences at work, easier to bear. I would highly recommend coming to China to any student who is thinking about it. If you do decide to come to China think of going to a city other than Beijing, Shanghai or Guangzhou, you’ll experience a whole different side, the one that the majority of the Chinese live in, of China. Plus there’s more than enough time to travel. And I know it will sound cliché but it really is an experience of a lifetime.

I often think about the wonderful classes I took while at GWU and sometimes wish I could go back and take them again. I’ll always be grateful to Profs. Jim Miller and Judith Plotz on their wonderful insights on literature and encouragements on my papers.

Thanks for keeping us up to date, Caren, and good luck in your noble endeavors!

It’s not often that a work of American literature makes the “Trending Topics” newsfeed at Twitter, but as of this writing, “Huckleberry Finn” is one of the most tweeted phrases online. You can read what some members of the GW English Department, myself included, had to say about the recent news that a forthcoming edition…

Edward P. Jones Inaugural Reading TONIGHT at 5 PMThe Jack Morton AuditoriumSchool of Media and Public Affairs, First FloorFree and open to all, though seating is limited The Pulitzer Prize winning author of The Known World, Mr. Jones is the Wang Visiting Professor of Contemporary English at GW for Spring 2009 Share on FacebookTweet

Every year we ask our graduating seniors what their post-GW future looks to be: the class of 2008 reported here, and 2007 here. Here are some of the replies we’ve received from the class of 2009. We are very proud of our majors, and wish them the best of luck no matter what the years…