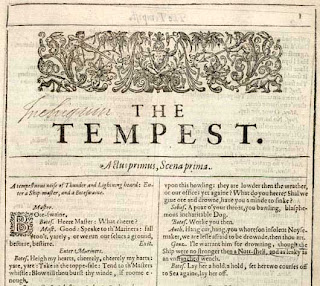 The syllabi are in, and there’s definitely something stormy and Shakespearean coming our way! That’s right, it is not in error that William Shakespeare’s The Tempest appears on the syllabus of so many classes this semester. On the contrary, it’s a conscious, calculated effort on the part of Profs. Jeffrey Cohen and Jennifer James to incorporate what Cohen calls a “living text” into courses throughout the English department. And to what does all this Tempest talk lead up? Well, TemFest of course!

TemFest, on Dec. 3, will feature speakers and other events. Environmental critic Steve Mentz and Amherst’s Anston Bosman are among the confirmed speakers.

The idea for a TemFest came from faculty dialogue after last spring’s MEMSI symposium Race? Prof. James explains “the idea for collectively revisiting Shakespeare’s The Tempest emerged from an email conversation I initiated with MEMSI Faculty about the figure of Caliban.” (At the time, James was preparing to teach the play in a graduate course, “Slavery, Britain and the Americas.”)

Prof. Cohen shared James’ awe at the power and potential The Tempest possesses in fields of study outside of English Lit. At this point, the scholastic storm was already brewing…

Cohen exudes excitement as he explains the upcoming TemFest events. “We want everyone to feel like they’re part of the conversation,” said Cohen. And it won’t be hard to feel included once you take a moment to identify the myriad modern retellings of this Shakespearean romance. The Tempest embodies “an inescapable myth,” as Cohen puts it. Shakespeare’s 17th-century play has transfixed, even trapped, writers and scholars for some four hundred years; it is the basis of Aimé Césaire’s Une Tempête, and has influenced contemporary works like Toni Morrison’s A Mercy and GW Prof. H.G. Carrillo’s Loosing My Espanish. Hey, there’s even a gender-bending film version in the works, with Dame Helen Mirren as Prospera, Director Julie Taymor being yet another [screen]writer who couldn’t resist revisiting this play.
Surveying the department, Prof. James noted the high number among her colleagues who’d written on some facet of this same play of Shakespeare’s. “Given how many of us were engaged with the play in some way,” James remarked, “it seemed a fantastic time to have a ‘teach in’ where the entire English faculty could discuss the play’s cultural magnetism and temporal elasticity.”
Get ready to be swept up by the gale force winds of TemFest!

Here’s a list of classes revisiting/referencing The Tempest this semester:

Eng 127 Shakespeare course w/Patrick Cook (which will include a slide show that explores varying representations of the character Caliban…!)

Author Dara Horn will be visiting GWU this Thursday! She will stop by Faye Moskowitz’s Jewish Literature Live class in the afternoon. In the evening she will be holding FREE reading at 7pm in the Marvin Center 3rd Floor Amphitheater. Come to hear the talented and charismatic author of The World to Come and All…

The author of The Yiddish Policemen’s Union, Wonder Boys, The Amazing Adventures of Kavalier and Clay, Summerland, The Mysteries of Pittsburgh — and MORE — will read from his work and then be interviewed live by Professor Faye Moskowitz. Michael Chabon will be introduced by Edward P. Jones, GW’s first Wang Professor of Contemporary Literature….