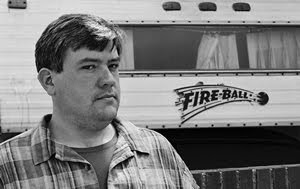 What influences poet Ed Skoog? Really, the question should be where is Ed Skoog influenced. Skoog, the newest Jenny McKean Moore Writer in Residence, may be in DC right now, but whose to say where he will be next fall. Even he does not know or want to know. “I don’t want to pick a place to settle down,” he said.

This somewhat nomadic existence is a good thing for Skoog and his poetry. Moving constantly is what stimulates him as a writer. He said, “It’s disorienting and exciting. The tensions that come from it are beautiful. So how can you choose? To choose one place is to deny so many others.”

Luckily, Skoog has never had to make that choice. Although his family has lived in Kansas for eight generations, he left as soon as he could, for college in Montana. Yet he did not even stay there for long and packed up a car to drive to New Orleans. For almost a decade he let the city inspire him, but coincidentally he took a job in California only ten days before Hurricane Katrina hit. There does not seem to be an semblance to any of these locales, yet Skoog sees it differently. “I’m drawn to places that were kind of margins of regular contemporary society,” he said.

Skoog has always felt somewhat on the margins of society just by his career choice. “Poetry is not a job exactly, but what I do,” he said. “All I wanted to do since age nine is write poetry. I’ve never been good at anything else.”

Skoog’s talent as a poet is what led him to the prestigious fellowship he holds and enjoys today. “It’s exciting to talk about poetry with people who are interested in hearing about it. It’s exciting and enlivening. Any conversation affects my work that day,” he said.

Although he only teaches two classes, one for undergraduates and one for all citizens of DC, Skoog has found himself incredibly productive since he arrived here. He walks around the city carrying a notebook and taking notes on what he sees and hears. “I go to museums, matinee movies, and observe street life. Its a mix of high and low art,” he said. Dialogue, everything from podcasts to overhearing conversation inspires him. In the evenings you can frequently find Skoog at the Black Cat taking in bands such as the Fruit Bats. A serious banjo player since age sixteen, he finds that music influences his work just as much as any other medium. And somehow, he still finds time to do a drawing or make a collage every morning.

There is no question about it, Skoog was meant to be in DC. The city has always held a special significance for him. He remembers visiting his grandparents in Bethesda and going to many arts events throughout DC as a child. He said, “Its important to me to develop a sense of the city, culture, aesthetics, art, and creative life here.” And there is no better time than now, “I want to go where the action is. Where there is good writers, art, living, and cooking,” he said.

Skoog has found his arts community through GW. “Wherever I go, the thing that changes is the audience, the people I meet,” he said. “My colleagues in the English department are fine poets, scholars, and readers. The department is very welcoming, friendly, and social. I automatically stepped into an interesting group.”

He is also a literal part of the community, living in the historic Lenthall House. “The house is a nice metaphor for the role of imaginative writing in the university. Its domestic, quiet, and private, a nice visual metaphor for the city,” he said. And Skoog is the perfect new inhabitant for the house, the city, and the fellowship.

Make sure to visit Skoog’s website. And look for his new book, Mister Skylight.

The English Department office has been ornamented, garnished, embellished, trimmed and bedecked for the season. Stop by, grab some chocolate, and see if this year’s theme (“Decorating to Annoy”) has been a success. Share on FacebookTweet

Photo Credit: “Eleanora Reading” (1997). Fernando Scianna, Milan, Italy We remain very excited about our newest faculty member, Professor Daniel DeWispelare, who is currently teaching Romanticism and Critical Methodologies.  For Spring 2013, he has designed a brand new Dean’s Seminar, “Literacy and Literature.”  Spread the word to those who are eligible–first-year CCAS students seeking a…

From the latest edition of Research & Discovery: In an extraordinary seminar that started last fall, The George Washington University and the Folger Shakespeare Library, one of the world’s premier independent research institutions, are offering a book history course exclusively for GW undergraduates. The semester-long class is an unprecedented opportunity for senior humanities majors interested…