A native of New Zealand, Professor Harris joined our department as a full professor in 2003. His undergraduate Shakespeare course has rapidly attained legendary status. A superb teacher and researcher, we are fortunate indeed to have him among our faculty.

From French Physiocrat theories of the blood-like circulation of wealth to Adam Smith’s “invisible hand” of the market, the body has played a crucial role in Western perceptions of the economic. In Renaissance culture, however, the dominant bodily metaphors for national wealth and economy were derived from the relatively new language of infectious disease. Whereas traditional Galenic medicine had understood illness as a state of imbalance within the body, early modern writers increasingly 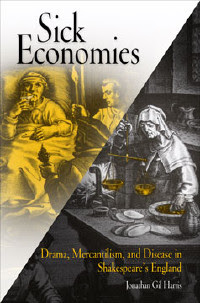 reimagined disease as an invasive foreign agent. The rapid rise of global trade in the sixteenth century, and the resulting migrations of people, money, and commodities across national borders, contributed to this growing pathologization of the foreign; conversely, the new trade-inflected vocabularies of disease helped writers to represent the contours of national and global economies.

Grounded in scrupulous analyses of cultural and economic history, Sick Economies: Drama, Mercantilism, and Disease in Shakespeare’s England teases out the double helix of the pathological and the economic in two seemingly disparate spheres of early modern textual production: drama and mercantilist writing. Of particular interest to this study are the ways English playwrights, such as Shakespeare, Jonson, Heywood, Massinger, and Middleton, and mercantilists, such as Malynes, Milles, Misselden, and Mun, rooted their conceptions of national economy in the language of disease. Some of these diseases—syphilis, taint, canker, plague, hepatitis—have subsequently lost their economic connotations; others—most notably consumption—remain integral to the modern economic lexicon but have by and large shed their pathological senses.

Breaking new ground by analyzing English mercantilism primarily as a discursive rather than an ideological or economic system, Sick Economies provides a compelling history of how, even in our own time, defenses of transnational economy have paradoxically pathologized the foreign. In the process, Jonathan Gil Harris argues that what we now regard as the discrete sphere of the economic cannot be disentangled from seemingly unrelated domains of Renaissance culture, especially medicine and the theater.

“Sick Economies, wholeheartedly committed to the recovery of noncanonical early modern writing, shows what can happen when a keen literary intelligence is applied to nonliterary texts. The result is a truly interdisciplinary and refreshingly readable book.”—Times Literary Supplement

“In this important book Harris explores the early modern discourse of mercantilism, tracing its merger with the discourse of bodily illness.”—Choice

“Harris has successfully argued a decidedly unique angle of interpretation. What may have initially struck the reader as an impossibly broad scope of inquiry is revealed, through rigorous textual analysis, as an intriguing interdisciplinary perspective that will certainly impact subsequent scholarship.”—Comitatus

“This book offers great insight into the Renaissance discourses of the body, the emergence of mercantile theory, and early modern drama.”—Seventeenth-Century News

Jonathan Gil Harris is Professor of English at George Washington University and the author of Foreign Bodies and the Body Politic: Discourses of Social Pathology in Early Modern England.

This Spring, Daniel DeWisepelare has been teaching Critical Methods (ENGL 2800W), and his students for this course will be presenting their work on critical theory and literature at “A Critical Methods Symposium and Party” today at 2pm in Rome Hall 771. The Symposium is in its second year and testifies to the thriving culture in…

GW English Major Katherine Bradshaw During the summer, as well as during the academic year, our majors often serve as interns in a wide range of locations.  Classical Studies major, English minor, and Dean’s scholar Katherine Bradshaw recently sent us a summary of her experience in Summer 2013 as an intern for the Shakespeare Theatre…