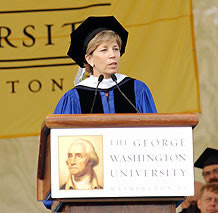 Below are some reflections on the GW English Department given by our former colleague Gail Kern Paster at Commencement in 2004. Professor Paster was the recipient of an honorary degree.

Professor Paster joined the department in 1974, rising from the rank of instructor to full professor. An internationally acclaimed Shakespeare scholar, Paster left GW in 2002 to become director of the Folger Shakespeare Library. Though we maintain close ties to the library, we hope to deepen them in the years ahead, as future posts at this website will detail.

I came to The George Washington University in 1974 as an instructor in the English Department, and I rose to the ranks as one does until I left in 2002. Throughout that time I’ve had the encouragement, the interest and the support of a number of Columbian College deans, of Vice President Don Lehman, and especially of our President, Stephen Joel Trachtenberg. Without that support, without that encouragement, without that interest for my scholarship and for my teaching, I could not have been awarded the opportunity, the great gift, of becoming the director of one of the world’s great libraries. Throughout that time as well, GW as an intellectual leader in humanistic education forged partnerships with the Folger Library that have strengthened both institutions in innumerable ways. In 1974 I could not possibly have imagined that I would stand on this stage today and receive an honorary degree. Indeed, in January of 2004, perhaps in April of 2004, I could not have imagined it.

So I am deeply honored and deeply grateful to you, President Trachtenberg, to the Board of Trustees, and to all my wonderful former colleagues sitting behind me who have contributed to the wonderful intellectual conversation that has been my life.

Thanks to all of you very much.

A noted Shakespearean scholar, Gail Kern Paster took office as director of the Folger Shakespeare Library on July 1, 2002. She continues as editor of Shakespeare Quarterly, the leading scholarly journal in the field, published by the Folger Library in association with The George Washington University. Paster was formerly professor of English at GW, where she had taught since 1974. In addition, Paster has been a trustee of the Shakespeare Association of America and just completed a term as president of that organization. She served two terms as a public member of the Folger Shakespeare Library committee. She has won many national fellowships and awards, including fellowships from the Woodrow Wilson National Fellowship Foundation, the National Endowment of the Humanities, the John Simon Guggenheim Memorial Foundation and the Mellon Foundation.

This semester honors student Katherine Bradshaw took home first prize at GW Humanities Day for her work on Shakespeare’s King Lear!  Katherine is majoring in English as well as Classics and has been working on her Luther Rice Fellowship project, which focuses on another Shakespearean work, Coriolanus. Professor Alexa Alice Joubin was Katherine’s mentor for her successful…

Although our undergraduate majors have been enjoying this site for a month, many new readers are finding the English Department’s blog this week via the Colonial Cable. We welcome you, and encourage you to have a look around. Try the “Contents at a Glance” list on the righthand side of this page. You may also…

One Book. One City. One Good Read.  That is how DC Reads, a DC Public Library literacy program that promotes reading for pleasure by having citywide celebrations for teens and adults that focus on one book, opens its description of this year’s selection.  Each year a new book is selected by a public nomination process.  This…