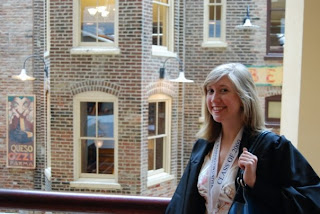 For alumna, Katy DiSavino, being a playwright was not really a choice, it was in her blood. As the daughter of parents who own a theater in Lancaster, Pennsylvania, DiSavino has been acting since she was child. Determined to breakout of theater once she went to GW, DiSavino sat her parents down for the long hard discussion of her break up with theater. She recalls telling her parents, “‘Listen guys, I’m done with the Theatre. Forever. I’m going to be a serious English Major.’ That lasted all of six minutes,” she said. DiSavino soon found herself in the student theater group the 14th Grade Players, an English and Creative Writing major with a concentration in Dramatic Writing, and an intern at the play publishing house, Samuel French, where she is now employed full time. “I can’t escape!” she jokes, however this is a good thing.

DiSavino cannot saddle all of the blame on her parents, but her GW professors as well. Always intending to be a Creative Writing major when she applied to the university, DiSavino found her real niche within the department during a class. “I first started toying with the idea when I took Intro to Dramatic Writing with Ally Currin,” she said. “I started to understand more about my writing with that class, and seeing Ally – a successful playwright – doing what she does, and listening to her insight and feedback – I don’t know. It really made me want to try to do that, too.”

Just as DiSavino recognized potential in dramatic writing for herself, her professors spotted a spark there too. Throughout various creative writing courses, she learned her writing process. However, it was really what her professors pushed her to do outside of the classroom that has led her to where she is today. She said, “Pati [Griffith] was a huge influence on me, and I was incredibly fortunate to have her as a professor and mentor. She encouraged me and pushed me and really shaped a lot of what I’ve written.”

It was because of her professors encouragement that DiSavino applied for and got an internship at Samuel French in the summer of 2007. Working in the Editorial Department throughout her internship was a fundamental career breakthrough for DiSavino. “It was the first time I realized I could maybe get a job in a field I actually cared about,” she said. Samuel French hired her to assist the Contracts Manager when she first graduated, but since then DiSavino has moved to the Marketing Department. She does not just work for Samuel French however, but is soon to be published by the company! 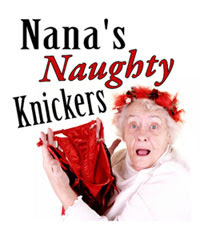 The play Nana’s Naughty Knickers was written for Griffith’s class. It is a farce about a grandmother who runs an illegal lingerie boutique from her rent-controlled apartment in New York City. When her granddaughter lives with her for summer, she is predictably shocked, but then helps hide her grandmother’s business from both her potential suitor, a young cop, and the landlord hell bent on evicting her grandmother. DiSavino was initially nervous about writing her first full-length play in a tough genre. “Farce is probably the hardest sort of comedy to write because it’s so technical – it requires a lot of outrageous things to happen in a completely believable way,” she said. Her second hurdle came when she envisioned potentially negative reactions to the subject matter. She said, “I was worried what I thought was freakin’ hilarious (c’mon, an 80 year old selling naughty outfits to other 80 year olds?) might not come across the same way to someone else – but the feedback I’ve received has all been really positive.”

This is an understatement. DiSavino’s play is not only being published, but staged in two different theaters. One will be at her parents theater, the Rainbow Dinner Theatre, from February to April 2010, and the other at the Barn Dinner Theatre in North Carolina in the fall of 2010. DiSavino is not overly involved in the staging process, but has been doing some rewrites for the Barn Dinner Theater’s smaller set. She has no qualms about this however. “It’s actually a pretty solid writing exercise, and it means that, in the long run, my play will be more marketable to theaters of all shapes and sizes because I’ll be fixing one of the biggest hurdles of the production for them,” she said.

Although DiSavino has a few ideas for other plays, she is so busy finishing up the final draft of her play that there has not been much time for writing. She would not trade the busyness for anything else though. “It still amazes me because being an English Major is a pretty risky (but totally satisfying) business – you never know what exactly you’ll end up doing,” she said. “But to be able to take my degree and then go on to work in a publishing house? It’s more than I ever hoped for.”

Spring 2012 will mark the fourth iteration of Jewish Literature Live, the unique course in which students read the works by writers who then visit their classroom for an intimate discussion. As before, each author visiting campus will give a free public reading. This year, the inimitable Prof. Faye Moskowitz has assembled a line-up of writers…

We are very happy to welcome the medievalist Jonathan Hsy to our faculty. We asked Professor Hsy to say a few words about himself, and he writes: I received an MA from Stanford and my PhD from the University of Pennsylvania, and I’m excited to be joining the English department at GW this fall. I…

This past fall saw the inaugural class of the Folger-GW Undergraduate Research Seminar. Focused on “Books and Early Modern Culture,” the seminar is the first offering of the new Undergraduate Program at the Folger Shakespeare Library. The seminar was developed with the support of the Dean’s office of the Columbian College of Arts and Sciences…

The faculty of the English department wish to congratulate the following seniors, who have completed the degree in our major with honors: Taylor Brown Bethany Flom Lisa Francavilla Alexander Frank Roxanna Maisel Catlan McCurdy Christopher Pugh Sarah Whittemore Elizabeth Wozobski Thanks to the generous endowments in the names of former students and faculty, the English…

The parade of Pulitzers passing through the Jack Morton Auditorium has been great: Edward P. Jones at his inaugural reading, Michael Chabon, Art Spiegelman. We love that 300 people could fill the seats of that vast space and attend these talks. That these were standing room only made us all the more pleased that we…

The GW English Department offers a five-year dual degree BA/MA program. Students complete their Bachelor of Arts at the end of four years of undergraduate study, and their Masters after one additional year. By undertaking graduate coursework during senior year, students complete the MA one year faster than they otherwise could. The first step to…