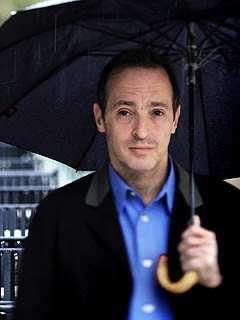 I had been in line for over ninety minutes. In this time I could have gone to a movie, but I needed to meet the man who made me laugh harder in just two hours than I have in an entire month.

There’s no doubt about it, if you thought David Sedaris was hilarious in print, you really need to hear him read live. His reading is not the dry sleep-inducing “class participation” professors often force you to engage in, but almost a stand-up comedy routine. Whether he’s reading fractured fables with very anthropomorphic animals or just pages out of his diary (which are just as well written and side splitting as his full essays) you hear a full variety of laughs throughout Lisner Auditorium.

Sedaris knows how to time a joke, but just because he’s a master of his craft does not mean he’s lost his humility. He knows how to answer audience questions ranging from “Have you ever drank breast milk?” (there was a relevance to this question believe it or not) to the nasty “What do you think about health care?” (Don’t you ever wish they would ban audience Q&As?).

Even after that annoying Q&A period, we were still hungry for more, and that is why I stood in line with all the rest of the NPR listeners and Capitol Hill staffers (it was amazing how few students were actually in the auditorium) to get my book signed and hear what the ever personable Sedaris had to say to me.

Maybe if you ever see me around the English department offices you will notice that I have an odd obsession with collecting bizarre animal-themed necklaces. Last night’s weird accessory happened to have an owl on it, which was surprisingly enough what Sedaris and I talked about. He proceeded to sign my book and draw an owl in it all while discussing whether or not I was an actual student here. He was glad to hear I was an English major (of course) and asked if I wrote or just read a lot Jane Austen. I replied I have done a bit both, but the writing did not surpass this blog. Though he did assure me this blog was a very valid form of writing and I should continue with it because I had a very “interesting way of talking.” Encouraged to write by David Sedaris? I couldn’t ask for a better night!

The English Department is pleased to announce one of the very first events of the new academic year.  On Friday, September 5, at 3:00 PM, Professor Rebecca Bushnell will deliver the Dean’s Scholars’ in Shakespeare Annual Lecture.  The Dean’s Scholars in Shakespeare Program is directed by Professor Holly Dugan.  This lecture will take place in the…

Don’t miss a reading with award-winning writer and filmmaker  David Bezmozgis Marvin Center Amphitheater 7:30pm Tuesday March 19th http://www.ft.com/cms/s/2/a68a2684-f1fe-11e1-bba3-00144feabdc0.html#axzz2Np6oFdJg Bezmozgis is the author of the critically acclaimed books  The Free World and Natasha and Other Stories, and is visiting GW as a guest of the Jewish Literature Live program.  Natasha and Other Stories won the Toronto…

A reminder — Nadeem Aslam, our first British Council Writer in Residence, will be reading from his work tonight at 7 PM in the Marvin Center Amphitheatre. Nadeem Aslam is the author of two prize-winning novels, SEASON OF THE RAINBIRDS and MAPS FOR LOST LOVERS. His third novel, THE WASTED VIGIL, will be published this…

Student organizers Tess Gann and Sara Policastro welcome the crowd to Open Space.      Jenny McKean Moore Writer Brando Skyhorse talking to student poets.  It was standing-room only in the hallway outside the living rooms.    Share on FacebookTweet