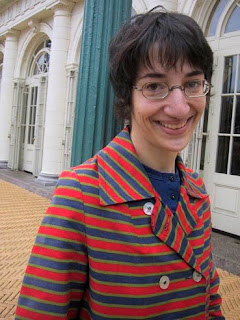 Myla Goldberg describes her first novel Bee Season as a “personal” novel, but do not mistake personal for autobiographical. The tale of young Eliza Naumann, a spelling prodigy and potential mystic, is not Goldberg’s own. “My first spelling bee was in fourth grade. I lost on the word ‘tomorrow,'” she said when she visited Jewish Literature Live on Thursday afternoon.

Eliza is not just a talented speller, but an ordinary Jewish girl navigating the rough waters of adolescence as exemplified by the spelling bee. This is where Goldberg was able to see her protagonist. After reading an article in a magazine, she realized what really fascinated her about spelling bees were the kids who did not win. Goldberg said, “We’re all losers. I’m a loser. I can relate to this.” However even with her initial connection to these children, Goldberg found herself doing a lot of research.

Her first plunge into the world of Eliza was actually attending the National Spelling Bee here. “The air was electric in there,” she said. “The kids do not know how to dissemble. Every emotion is so clear.” What Goldberg observed that day was not just kids spelling ridiculous words, but a greater reflection on American culture. “Everyone must be best at something and the spelling bee is a perfect reflection of this,” she said. One can see her initial draw to this culture, but how did Jewish mysticism get into the picture?

As it turns out, Goldberg is no stranger to the constant scramble students face in filling up their schedule at college. On a whim, she found herself in a Jewish mysticism course as an elective. Raised as a Reconstructionist Jew, Goldberg was unfamiliar with the ideas of Abraham Abulafia, a Jew who believed language held mystical properties. The connection between spelling and mysticism was natural to her. She said, “As an artist I have a belief of powers of the subconscious. My back brain remembered about Abulafia and it just fused in my head.” The book eventually focused on the themes of family, ritual, and rules as Goldberg wrote it.

Although Goldberg joked about the pile of rejections she received from every publishing company with her previous novels, this was her first published novel. The response to it was overwhelmingly positive, casting Goldberg as “the next big Jewish author.” She was honored by all of the attention, but maintains that she does not directly see herself as a Jewish author. “I don’t have a background with Jewish writers. It was not what I thought of as I was writing it,” she said.“I see it more of an American novel with the Jewish experience.” Goldberg is anti-label, but appreciates the reception of her writing. “My goal is to keep writing as long as possible, so anything that helps me do that is my friend,” she said.

However, Goldberg finds that the Jewish literature label is constricting. “Right now there is a far too narrow band applied to what is Jewish,” she said. Her second book is not about Jews, yet because she is a Jewish author, is it still a Jewish book to her. It is a label Goldberg is torn about. When forced to pick a label, she said, “I am a female writer, an American writer, a Jewish writer. I’m a writer.”

Goldberg is a writer of short stories, three books (the upcoming novel is due out in October), and a mother of two all since Bee Season. Clearly the novel has affected her life greatly, so has she thought of it much since? “I have not read this book since I finished it,” she said. “When I am done with something, I am done. I move on.” Where is Goldberg moving to next? Perhaps her writing process is an indication of her plans, too. “I do not actually know what’s going to happen yet. I usually go in A to K to Q, but something morphs at Q and it turns into a flying pig,” she said. “The cool thing about a book is that I have my own answer, but that is not a definitive answer.”

For more on Myla Goldberg, check back tomorrow for a recap of her reading at the DCJCC.

English 40W: Myths of Britain Spring Semester 2009Jeffrey J. Cohen Much great English literature turns out not to be so English after all: the action of the epic Beowulf unfolds in Scandinavia; King Arthur was a Welsh king before he was an English one; Shakespeare’s Tempest takes place on an island in the Mediterranean, but…

If you are a current GW undergraduate and you had the chance to meet our GW-British Council Writer in Residence Suhayl Saadi, would you please take this very brief survey? We’d be extremely grateful. Share on FacebookTweet

I’ve just returned from 6th and I, one of the most beautiful synagogues I’ve entered … and a lively space for the arts in DC. The English Department hopes to work more closely with them in the future. Here is an event for your calendar. GWU students can come for free. RSVP to jleventhal@sixthandi.org and/or…

Although we are at GW to learn, we must admit that student discounts are a huge benefit of being a college student. If you were interested in hearing Orhan Pamuk speak at the Smithsonian, but slightly worried about the ticket price, you can now attend because tickets will only be $10 for students! With this…

[fig 1: The IMDb doesn’t know what Dante looks like]by J J Cohen So John Filardi, an alumnus of the GW English Department, is here teaching a course on screenwriting, focused upon comedy. By all accounts it has been a terrific class. Today he invited Emmanuella Chiriqui (Sloan from Entourage) to his class. When I…

The Religion Thing, a world premiere comedy by GW playwriting professor Renee Calarco, kicks off Theater J’s “Locally Grown: Community Supported Art/From Our Own Garden” Initiative. In it, according to Theater J, Mo and Brian are a picture-perfect DC couple: they’re smart, they’re witty, and they have a beautifully remodeled kitchen. But when Mo’s best…