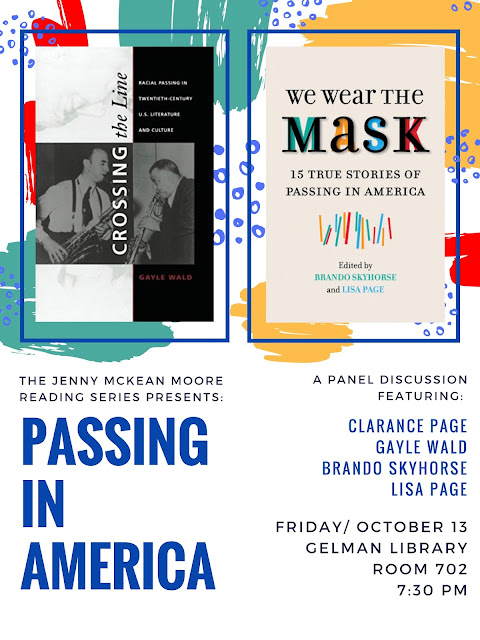 Join us for “Passing in America,” the next installment of the Jenny McKean Moore Reading Series, on Friday, October 13th at 7:30 PM in Gelman Library, room 702. Moderated by Pulitzer Prize-winning journalist Clarence Page, this panel discussion will feature Gayle Wald, Brando Skyhorse, and Lisa Page, and aims to generate a discussion addressing the question of what it means to pass racially, socially, and economically in modern-day America.
Our panelists will explicate two recent works. Crossing the Line: Racial Passing in Twentieth-Century U.S. Literature and Culture by Gayle Wald, published by Duke University Press, explicates the phenomena of the “”the color line” and U.S. racial “order” as it is written about in literature. By both analyzing black writers and the portrayal of black bodies by white, hegemonic ones, Wald examines both liberal contradictions and the fallacy of “color blindness” in our modern political era.
Published by Beacon Press this past year, We Wear the Mask, edited by Lisa Page and Brando Skyhorse, seeks to illustrate the “complex reality” of what it means to “pass” as white, straight, or cisgender, whether electively or not. This collection features fifteen true stories that reveal a multiplicity of experiences in which citizens seek to gain safety, opportunity, and access only afforded to white American citizens, or conversely, the experience of having others choose to make them “pass” in specific social situations.
To learn more about the nuances of self and social identity, we hope you will come to what is sure to be a riveting and informational event.
Clarance Page is a prize-winning American journalist, who has written for the Chicago Tribune for more than fifty years. He most recently appeared on Hardball with Chris Matthews on MSNBC. Mr. Page has written on the subject of race when in 1996 he published, Showing My Color: Impolite Essays on Race and Identity.
Gayle Wald is an American Studies Professor at George Washington University. Her most recent book, published in 2015, is “It’s Been Beautiful:” Soul! and Black Power TV (Duke University Press). Her areas of expertise are African American literature, U.S. popular music cultures, cultural theory, race theory, feminist and gender studies.
Brando Skyhorse is a writer and former Jenny McKean Moore recipient. His most recent memoir, Take this Man, is about learning the truth of his racial and ethnic identity when he discovered his mother passed him as an American Indian before he learned he is actually Mexican American.
Lisa Page is a writer, professor, and director of creative writing at George Washington University. In We Wear the Mask, Page writes about the experience of her white mother passing her as white and denying her bi-racial identity. She is the former president of the PEN/Faulkner Foundation and her work has appeared in Virginia Quarterly Review, The Crisis, Playboy, The Washington Post Book World, The Chicago Tribune, Chicago Scene, Phoebe, Society and Space among other publications.

Join GW English and Creative Writing next Thursday at 7:30 PM for a reading by Assistant Professor Jennifer Chang.  Professor Chang joined our faculty this year and teaches poetry in the Creative Writing Program.  Check out our interview with her from last May here.  And see you at the Honors Townhouse next week! Share on…

Drugs. Sex. Money. Excess. Narcissism. Moral depravity. I could be referring to the nightly news, but really I am referring to Oscar Wilde’s The Picture of Dorian Gray. That novel about a man who sells his soul for eternal youth and beauty, that slowly sucks you in, thrilling and horrifying you at the same time….

Come celebrate Shakespeare’s birthday TODAY with GW English students and faculty. This birthday bash (with food, poetry readings, crafts, and more) starts at 2pm on the Gelman Library terrace (overlooking Kogan Plaza) and is co-organized by the GW Bardians, English, Gelman Library, and the Dean’s Scholars in Shakespeare Program. #WillsBDay A message from the GW…