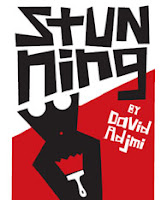 On Monday, March 3, Prof. Gayle Wald participated in Woolly Mammoth Theater’s panel discussion for its new play, “Stunning.” Prof. Wald was invited to contribute her scholarly insight into the play’s themes.
Here is what Prof. Wald had to say about the event:

The evening consisted of a reading of a scene from the play by two students from the University of Maryland, followed by a panel discussion in a Q&A format.

“Stunning” centers on two characters: Lily, a 16-going-on-17-year-old Syrian-Jewish bride, who is marrying a man much older than she, and Blanche, a 43-year-old black woman whom Lily hires as her maid. Lily comes from very insular community, and so Blanche’s presence forces her to question her assumptions. And so on.

I also talked about Lily’s characterization of herself as “white” and Blanche’s perception that she is not white. There is a tension in the play between Jewishness and Arabness. As a U.S.-born Syrian Jew, is Lily Jewish? Is she an Arab? Is she white?

The show opens March 10 at Woolly Mammoth Theater, and there will be pay-what-you-can performances that night as well as March 11. Prof. Wald would like to encourage all GW students to see live theater, especially “Stunnning,” which looks to be “an interesting and challenging play.”

Lots of us remember last year’s visit to GW of English novelist Howard Jacobson, our 3rd British Council U.K. Writer-in-Residence, and author of the witty and wonderful Kalooki Nights. Well, the “Jewish Jane Austen” (or, as he might prefer, “English Woody Allen”) has a new novel, The Finkler Question, recently published in Britain. Click here…

We get excited about many things in the GW English Department. Our objects of affection range from guest lecturers to free copies of books being doled out. So naturally our enthusiasm has only doubled with the addition of the British novelist Howard Jacobson to our staff next semester as a visiting professor. Not only do…

from Gil Harris, Director of Graduate Studies:This year’s English Graduate Student Orientation is scheduled for Wednesday, August 26, from 9:00 till 11:00 am in Rome 771. All new graduate students — including first-year BA/MA students, entering MA students, and entering PhD students — are expected to attend, but everyone else is welcome too, especially faculty…

An undeniable fact: the humanities are strong at GW. The English and History departments alone have well over two hundred majors, each. Both departments have a long history of graduating distinguished alumni. Both possess world class faculty whose research has taken their disciplines in new directions. Both are well known for their excellence in teaching,…