This lecture explores a startling coincidence in world literature: the overlapping careers of Lin Shu 林紓 (1852–1924) and Muṣṭafā Luṭfī al-Manfalūṭī (1876–1924). Both men—who died in the same year—published famous “translations” of Western-language fiction without the benefit of knowing foreign languages and put forward a set of traditionalist literary values through their practice as writers and figures in the popular press. Their popularity also generated harsh disavowals from their contemporaries and from later generations eager to show they were modern writers, critics, and readers of Arabic and Chinese literature. My discussion of Lin’s and al-Manfalūṭī’s translations of Jacques-Henri Bernardin de Saint-Pierre’s Paul et Virginie shows how the parallels between the careers of these two writers gives us new ways to understand how translation plays into recent debates about world literature

Michael Gibbs Hill (Ph.D. 2008, Columbia University), Visiting Associate Professor of Chinese, comes to William and Mary after teaching for nine years at the University of South Carolina. His research and teaching interests include Chinese literature and cultural history, translation studies, and connections between China and the Middle East. For the 2016–2017 academic year he will hold an ACLS Frederick Burkhardt Residential Fellowship at the Kluge Center at the Library of Congress. 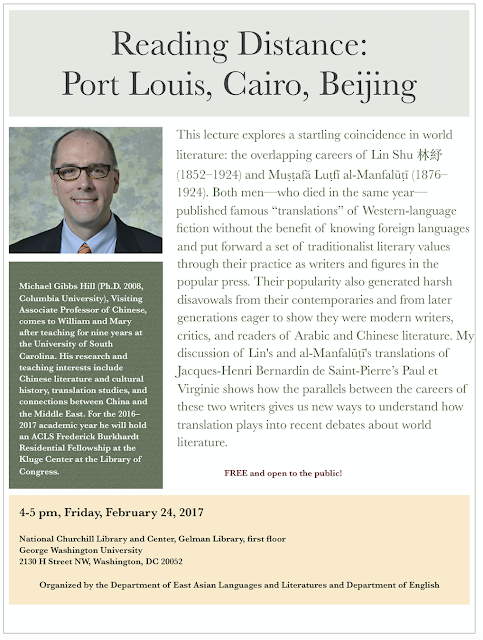 The Jenny McKean Moore Reading Series Presents: Mishka Shubaly April 26th in Gelman 702, 7:30 PM Mishka Shubaly is a musician, memoirist, and marathoner who has written about his experience with “drink, drugs, disasters, desire, deception, and their aftermath,” as well as recovering from addiction and his new life in sobriety.  The author of several Kindle Singles bestsellers, his work…

While we are all looking forward to the Edward P Jones Inaugural Reading this Thursday at 5 PM in the Jack Morton Auditorium, alumni of GW will want to add another event to their calendar. You must register in advance, and may do so by following the link at the bottom of this post. Knowing…

still from Marguerite (Marianne Farley, 2017) Students in English 3980W and 3910 invite you to attend a public symposium where they will combine and present their work-in-progress  Four sessions will be held Saturday, December 7, in Phillips Hall 412 (the Dean’s Conference Room), from 10:30 AM-5 PM.  The schedule is below.  Come out and support this…

All GW faculty and students are invited to attend — and participate in — this hallowed event. If you are willing to read, please contact: Bob Kolodney (bobko@post.harvard.edu, or 202-237-5202) If you’ve never heard of BloomsDay before, examine Margaret Soltan’s mania for the day. BloomsDay2008 Reading There will be a reading of Highlights from Ulysses…