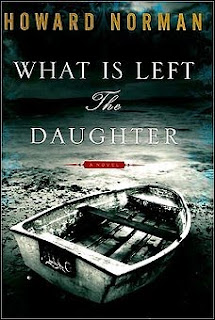 On Thursday, October 28, a herd of anxious attendees–students, professors, the book-selling rep–heralded yet another successful reading in the fall JMM Reading Series. At 7:51 pm the doors remained locked; I (perhaps peevishly) took pleasure in each arriving individual, for they approached the shut doors and the unrelenting deadbolt with a fervor I found refreshing. Peeve, Pollyanna, call me what you will: in each attempt to enter the Marvin Center Amphitheater I saw positive persistence. “Is Mr. Norman inside?” a student stammered, as successive, unsuccessful attempts to open the door led some to suspect the trick was on them.

In a matter of minutes, the Marvin Center staff opened the door, and the herd filed in to await the entrance of Norman with respectful reverence. The novelist was introduced by fellow fiction writer/head of GW Creative Writing Thomas Mallon (credited with writing the introduction to one of Norman’s collections of short stories The Chauffeur, Prof. Mallon came prepared). Mallon’s opening words offered a snapshot of the sincere, curious center from which the featured author explores human lives in extremis. Mallon mentioned Norman wrote his thesis on “Fatal Instances of Unrequited Love,”and this subject–humanity located in an almost inhuman, extreme, agonizing environment–seems continually crucial to the creative mind of Norman.

Although only addressed in passing at this reading, the symphonic structure attributed to Norman’s fiction writing is a subject the author addresses in several extant interviews about What is Left the Daughter:

….if they [novels] did not offer difficulty in the writing how would you ever feel you needed to maintain the deepest possible level of engagement with the story, its setting, its character, every aspect of the symphonic structure a novel requires? [without this level of almost “operatic” dramatic engagement] You would have only stayed on the surface of life. The difficulties of writing are the most tenaciously adhesive elements of writing itself, in that they won’t loosen their grip until you have dealt with them directly and the whole cloth.

(interview by ‘Jen’ with seattlest)

This idea of the novel as an opera, or a symphony–with choral components (dialogue)–of course, is captivating. As Norman read an excerpt from his recent novel, I glimpsed the panoramic nature of the author’s writing–the “whole cloth” if you will. Norman was the conductor. He read the scene–a dinnertime dialogue–in speech schizophrenic, but the actions and reactions read were unavoidably components of the texture of this dynamic, cloth whole.ll It seemed almost unfair to experience an excised sliver of this story. After all, an excerpt of a symphony hardly allows for attention to the moment when the cellist ceases play and sits back on his stool as the violinists move their wrists, shifting to rapid strokes in the upper registers of their instruments. Even a movement is merely a part of grander spectacle.

Words and sounds–in casual conversation, philological study, wartime radio broadcasts–are all attached and interwoven in Norman’s writing in a complex yet canorous manner. Even silences, according to one of the novel’s characters, play a role. Silences, Wyatt’s aunt argues, indicate “angels are passing.” In explaining the complicated love triangle in What’s Left the Daughter, Norman employs musical metaphors: “It was imagination working in concert with basic incidents and circumstances of people’s lives during wartime that I discovered during my yearly travels in Nova Scotia that made for a duet between fact and fiction.” Toward the end of a brief Q&A session, the author told an anecdote that highlights the delicate nature of composing such a duet. With a small smile–close to a chuckle–Norman told of the response of one friend from the maritime provinces to What is Left the Daughter. Norman had sent her his manuscript to make sure “there were no embarrassing” misrepresentations contained in its pages. The woman wrote back. The piece was fine–yes, it was good, she said only those cranberry scones (consumed by several of the central characters) weren’t right. No, she maintained, they’d of been raisin scones, really.

The Jenny McKean Moore Reading Series presents two nonfiction writers: David and Margaret Talbot, on October 14th at 6:30 pm. Their book is By the Light of Burning Dreams: The Triumphs and Tragedies of the Second American Revolution. They will be in conversation with Professor Virginia Hartman. Share on FacebookTweet

Hello, English majors and weekend warriors! If you’re looking for something stimulating to get into this weekend, and every weekend, know that GW English News has got your back. Every Thursday we will be posting information on engaging, thought-provoking, fun events that are happening around the city. If you have a favorite open mic night or…

In Harry Potter and the Deathly Hallows, JK Rowling describes a statue of the Potter family in Godric’s Hollow’s village square and a memorial sign in front of the house where James and Lily died but never explains where they came from. Listen to a theory about when these memorials were likely to have been…

Professor James A. Miller The Departments of English and American Studies and the Program in Africana Studies invite you to join us for “A Celebration of the Work of James A. Miller,” on Friday, September 11, from 2-6 PM.  This event will be held in the Jack Morton Auditorium (805 21st Street NW). Professor James Miller…

The JMM Reading series and the GW English Department present:  MASTER CLASS:  READING YOUR WORK ALOUD with Lloyd Schwartz    Lenthall House, 606 21st Street April 18th 7:00 pm Join us for a talk/workshop to discuss and practice what makes a good poetry or fiction reading! Lloyd Schwartz is Frederick S. Troy Professor of English and…

Join Jenny McKean Moore Writer-in-Residence Brando Skyhorse and Acting Director of Creative Writing Lisa Page in a discussion to be held this Monday at the Hill Center at the Old Naval Hospital.  Presented by Hill Center & PEN/Faulkner. 921 Pennsylvania Ave SE, at 7:00 PM. Free and Open to the Public. Share on FacebookTweet