On Wednesday March 5, 2014, the English Department’s British and Postcolonial Cluster hosted Professor Jim English (University of Pennsylvania) for an exciting lecture entitled, “Translated from the English: British Reality on the Global Screen.” This fantastic event was co-hosted by the University Honors Program and was made possible by a generous gift from English alum Sharyn Rosenblum (BA ’86).
English, who is a distinguished scholar of modern and contemporary British writing and has published numerous acclaimed books, including The Global Future of English Studies (Blackwell, 2012) and The Economy ofPrestige: Prizes, Awards, and the Circulation of Cultural Value (Harvard,2005), spoke to a packed house of nearly 100 undergraduates, graduate students, and faculty members. 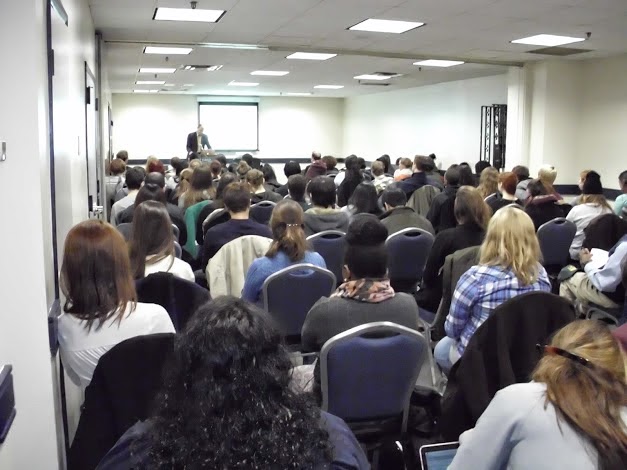 The lecture itself, which was derived from a longer project Prof. English has been working on concerning the cultural meaning of Britishness in the present, traced the ways that the British culture industry has, over the course of the past few decades, circulated numerous localizable and tremendously popular cultural formats, the ubiquity of which testifies to the enduring and even neo-imperial reach of Britain in the world.  For example, Professor English was interested in pointing out the British origins of competition show formats like American Idol and Who Wants to Be a Millionaire, which, although known by these names in the USA, are formats that have been circulated and become popular in many different geographical and linguistic spaces. Moreover, English proposed various ways in which we can understand these formats as a product of a much longer history of British documentary filmmaking. The documentary tradition’s longstanding interest in naturalistic depictions of social reality was convincingly positioned as part of the cultural heritage of reality TV as exported in customizable formats: American Idol, Arab Idol, Bangladeshi Idol, Chinese Idol, Deutschland sucht den Superstar, to name just a few.
This was a great event that students really enjoyed and the British and Postcolonial Cluster is looking forward to many more such events! 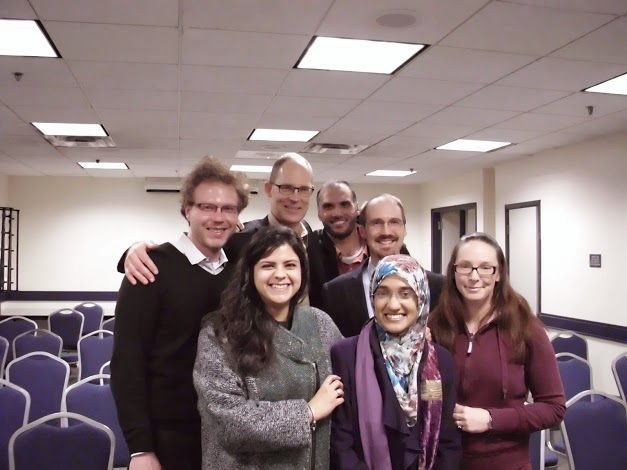 Many thanks to Professor English for taking the time to visit and Sharyn Rosenblum for her generous contribution.
Commentary on the event was written by
GW Professor Daniel DeWispelare.

Join us tomorrow, Thursday March 22nd, in Gelman 102 for the next installment of the  Jenny McKean Moore Reading Series  featuring:  Lauren Camp A poet, performer, writer, and educator, Lauren Camp will read from the latest of her three books  of poetry,   One Hundred Hungers,  a collection that “explores the lives of a first-generation Arab-American girl and…

English graduate students at GW are a busy and productive group. In addition to the usual–taking classes, studying for and taking graduate exams, writing master’s and PhD theses, teaching and TAing–they do a tremendous amount of work organizing social and academic activities. These include research discussion groups, dissertation reading groups, and the occasional EGSA night…

Feel like you have missed all of the famous author readings this semester? Although there are only a few authors visiting GW in the next coming months (Margaret Atwood will be doing a dramatization of her latest novel The Year of the Flood at Lisner Auditorium this Friday, October 30th. Tickets are as low as…

Tony Kushner will be arriving in  20 DAYS! http://www.aceshowbiz.com/events/Tony+Kushner/tony-kushner-2013-writers-guild-awards-press-room-01.html Tony Kushner is coming to visit GW through the Jewish Literature Live Program thanks to a generous grant from David Bruce Smith. In conjunction with Kushner’s visit we have and will be running the ACTING UP film series and a series of Play Workshops focusing on…

GW’s Columbian College of Arts and Sciences will give away 1,000 copies of The Known World by Edward P. Jones. A Pulitzer Prize-winning author and Washington, D.C., resident, Mr. Jones is the first Wang Visiting Professor in Contemporary English Literature. He will be in residence in the English Department during the entire spring semester of…

The Department of English is very happy to announce one of our first events for the Fall 2013 Semester.  On September 12, 2013, from 4-6 PM, please join us in Marvin Center 301 for “No Longer Secret: Willa Cather’s Letters. A Conversation with Andrew Jewell and Marilee Lindemann.”  This event will be moderated by our…