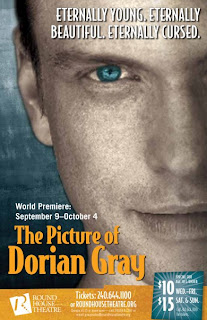 Drugs. Sex. Money. Excess. Narcissism. Moral depravity. I could be referring to the nightly news, but really I am referring to Oscar Wilde’s The Picture of Dorian Gray. That novel about a man who sells his soul for eternal youth and beauty, that slowly sucks you in, thrilling and horrifying you at the same time. You cannot leave that book without being a little scarred, but also excited too.

Clearly many others have been impacted by Wilde’s hedonistic writings, for Roundhouse Theatre in Bethesda, MD has turned the infamous novel into a play. Why pick the only novel by Wilde, when the man wrote many plays? Yet playwright Roberto Aguirre-Sacasa did not just change the form of the story, but also the setting. I do not know what type of reader you are: the one who finds the Venice Beach setting of Baz Luhrmann’s “Romeo+Juliet” offensive or the one who relishes modernizations. Personally, I am always eager to see a book jacket dusted off and turned into something visually gripping. If the book is turned into a play then why not go all out?

Dorian Gray is particularly modern in a world of Botox and Hollywood. Setting the story in 1980s London is perfect for the plot. It was a time of too much money, too much cocaine, and moral extremes. It was also the time when now-famous modern artists, like Damien Hirst, were discovered, thus making Dorian’s haunting portrait relevant.

The portrait is certainly haunting. In many ways, the story works better visually. We can really see the excess of Dorian’s life and the degradation of his painting because of this. This is not a play for children (particularly because of the full frontal nudity) or those easily prone to nightmares. The novel is not a fairytale, but one gone wrong.

For the most part, the actors understand this. With a sparse, but sharp cast of seven, each actor is relied upon to convey many characters and emotions. Dorian himself is perfectly tortured and the rest of the actors show their torment well. There is one weak part though and sadly this actress drags down the first half of the play with her appalling British accent. Its a little ironic that she happens to play the “actress” Dorian falls in love with only because of her acting.

Nevertheless, the play is gripping and an intriguing overall adaptation.

Join us for “Passing in America,” the next installment of the Jenny McKean Moore Reading Series, on Friday, October 13th at 7:30 PM in Gelman Library, room 702. Moderated by Pulitzer Prize-winning journalist Clarence Page, this panel discussion will feature Gayle Wald, Brando Skyhorse, and Lisa Page, and aims to generate a discussion…

Professor Faye Moskowitz LUNCHTIME LECTURE Patchwork Quilts and the Jewish Concept of the Kapore GW ALUMNI HOUSE, 1918 F STREET, NW Wednesday, September 17, 12 PM  Faye Moskowitz, a professor in GW’s English Department, will discuss and read from her essay “And the Bridge is Love.” Moskowitz uses an antique patchwork quilt to illustrate the Jewish concept of…

George Pelecanos Reading  Thursday, January 23rd in Marvin Center 301 at 7:30pm http://diariodellafenice.blogspot.com/2011/09/in-libreria-george-pelecanos-il.html A Washington native, Pelecanos worked many odds and ends jobs before publishing his first crime novel, A Firing Offense, in 1992. His novels plunge readers into the gritty world of murder and drugs that he constructs from personal observation and research. In a conversation Pelecanos explained, “My…