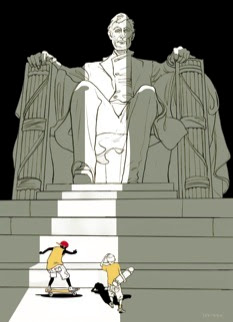 Check out “Set in Stone: Abraham Lincoln and the Politics of Memory” in this week’s New Yorker (October 13 2008). A review of Looking for Lincoln, the essay is also a meditation upon “the first [president] with a psychology, a delicate mental makeup that suggested itself to anyone who saw his picture in a newspaper, let alone heard him on a platform.” Mallon’s description of Lincoln’s only surviving son, Robert Todd Lincoln, are especially poignant:

Robert had spent his early life seeking, and never truly winning, his father’s approval; after his father’s murder, six decades of mass sympathy and deference left him equally unsatisfied. He knew that he would never have been made Secretary of War or Ambassador to Great Britain without the Lincoln name, and his weird accidental presence at the assassinations of Garfield and McKinley, in 1881 and 1901, must have seemed a fateful punishment for refusing his father’s invitation to Ford’s Theatre on April 14, 1865. That night, Robert stayed home to study Spanish, just as he had chosen to remain upstairs in the White House the day his parents took lowbrow delight in an East Room reception for the newly wed Mr. and Mrs. Tom Thumb.

A novelist of international fame, Mallon teaches creative writing and literature here at GW. You can also see him at out Literature in a Global Age panel on October 22.

Spring break has officially started (although some of you left yesterday, I’m jealous). Just because you plan on taking a week off from Geoffrey Chaucer and James Joyce, doesn’t mean you should stop reading. It’s time for “pleasure reading”! Maybe those words seem foreign to over caffeinated English majors who pound out more papers than…

Former GW-British Council Writer in Residence Nadeem Aslam has a beautiful little story in the New York Times magazine entitled “The Homesick Restaurant.” Check it out. Share on FacebookTweet

[photo by Calder Stembel] First, THANK YOU to all of our readers who attended the Edward P Jones Inaugural reading last Thursday. The previous evening I had had a nightmare in which the only people in attendance at the event were me, Edward Jones, Steven Knapp, and the English department secretary. I imagined that President…

In 2006 I was elected by my colleagues to serve a three year term as chair of the English Department. Doing so has been an honor, and a privilege. I know that sounds cliché, but I make the statement with feeling and without irony. I have the best colleagues, we teach the brightest and most…