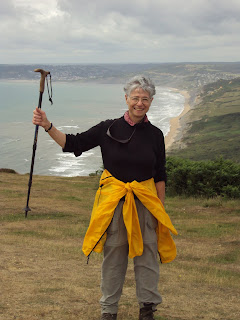 Judith Plotz is amazing, but you already knew that. One of our most beloved faculty members is retiring this year because, as she puts it, “Well, I thought I better retire when people were surprised I did rather than when it wasn’t surprising.” Jokes aside, Prof. Plotz has been inspiring students to follow their passions for decades now; it’s finally time that she follows her other passions.

These passions have nothing to do with the traditional retiree trip to Florida. Rather, Prof. Plotz dreams about walking the Via Francigena, the ancient road between Rome and Canterbury, with her husband. She said, “All of these walking trips take a certain amount of time and stamina, and we’re not getting any younger. I want to do this before my knees go.” However, Europe is not Plotz’s only future destination; she may be teaching in India or Turkey. So if you never were able to take her romanticism class, now is your time!

Plotz has been teaching romanticism for years now and if you thought the GW’s Square 54 building was going up fast, just imagine how much Plotz has witnessed the campus transform throughout the years.”The campus was lower, uglier, more modest–there are some remains of the rowhouses. Physically it was much less imposing. It looks ever much better,” she said. However, the real change that Plotz has noticed is in her students.

Plotz can track the student dynamic by each decade. She said, “The 1960s and ’70s were a wonderful period to be a young teacher. Students weren’t necessarily academic and pedantic, but they were immensely sure literature could change the world. There was an earnestness about reading.” In the 1980s, Plotz noticed more conservatism among her students. “They were good students in the way the ’60s students weren’t. They did work on time, didn’t do as much pot, but were intellectually more conservative,” she said. Perhaps the ’60s experience is reemerging today though. “Today, the idealism is different than the ’60s and ’70s, maybe partially due to bad times, but people’s ambitions now as an English major are more of an emphasis on getting a good profession, more in the direction of social activism. It’s a good change,” she said. “Turbulence in the economy in some ways is freeing. The safe choice isn’t so safe anymore, may as well do what your skills and heart want.”

Plotz herself almost did not follow her heart and thought about becoming a doctor at one point. “My father was a doctor. Periodically, I thought I should’ve been a doctor,” she said. “Sometimes I think I should be doing something healing, physically, not metaphorically, but metaphorically I believe literature is as healing as as medicine.” Naturally, Plotz’s thesis was on John Keats, the poet and doctor. As it turns out, teaching romanticism has always been in her blood and throughout the years she has taught every form of it from romanticism and autobiography to “green” romanticism. However her favorite course lately is her Children’s Literature course.

Of course, part of her is tempted to stay at GW forever. She said, “This is a very engaging profession and there’s always something new to do.” She particularly loves her colleagues. “My young colleagues are fabulous, wonderful, lively people. Here there has always been considerable respect and we generally do have a diversity of method in this department,” she said. Similarly, the students are equally impressive and passionate. She said, “We’ve always had students who were very keen on English from the word go, the board scores go up and we have a lot of the smartest students.” Students are not the only young people in Plotz’s life, she also has five grandchildren she would love to see more often.

Despite her walking tours and visits to her grandchildren, Plotz will not have fully left the academic sphere behind. She is hoping to finally work on her book on Rudyard Kipling and perhaps pursue fiction. “I played around a lot with fiction, but somehow the fiction got crushed out of me,” she said. “I’ve done half of a novel and I want to finish that.” Mostly Plotz would just like the time to finally enjoy everything she has been unable to do for years. “I’m doing it right, with leisure, without the anxiety of [teaching] class,” she said. Although we will miss her, we wish her the best of luck with her travels and books!

Someone once told Greg Pardlo, GW’s newest creative writing professor and poet, that academia could ruin his poetry. After Thursday night’s poetry reading however, Pardlo should have no fear that he is losing his talent, if anything, his talent is increasing. For a man with many awards to his name, Pardlo is incredibly humorous and…

We asked GW graduate Rati Bishnoi to let us know what she has been doing since finishing her degree. She writes: Presently I work as a defense reporter here in DC. After graduating in 2003, I set out to pursue a job in journalism and publishing. Before landing at the independent publication “Inside the Pentagon”…

The Children’s Literature Association, or ChLA, is an organization devoted to encouraging high standards of criticism, scholarship, research, and teaching in children’s literature–a field more or less “invented” in 1973, when a group of professors set out to remedy the scholarly silence around–even embarrassment about–literature written for children. Every year the organization hosts a national…

The English Department cordially welcomes Steven Knapp as the new president of the George Washington University. In case any readers need further proof of the many jobs open to English majors, we would like to point out that President Knapp is a scholar well published in both literature and critical theory. We also find it…

Come hear Lytton Smith deliver a talk entitled “The Unending Medieval and the Edges of Poetry” and read from his work. Details here. And, for your poetry reading pleasure, here is movement III of Smith’s sequence “Monster Theory,” from The All-Purpose Magical Tent. (I can’t get the spacing to work out so I’ve ruined the…