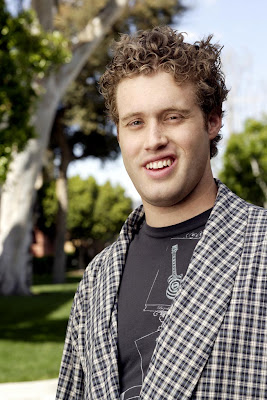 I remember that Prof. Griffith was the first person to encourage my writing. She was the first person to validate that I had a writer in me–I just had to develop that, and that discipline was an important aspect of that development. The first time people read my words in my playwrighting class, and it got laughs, I realized that something I wrote could be funny without the requirement of my delivery of it. And so I began to see the comedic power of words. I began to understand that the words are half of the material, and required the same amount of attention. And I learned the necessity of editing, something that comedians must have to be successful. It is vital. Johnny Carson always said that editing is the difference between success and failure. I learned that I was going to have to treat a piece of writing as something that would grow and change, not something I just spit out and hand in. I asked her to be my advisor for my honors thesis because I knew that I needed someone who could help me with the writing. I was a performer, I was in receSs, I knew how to perform. I was sure I could get the laughs. But the point of that thesis was to be structurally and philosophically strong, to approach a subject, the subject of what a one man show is, with great analysis and meticulous attention to the words. I didn’t just want it to be funny, I wanted it to be art. That required great attention to the words. So it was a great fit. And I’ll never forget when she saw my first run through of some of the material. She said “I have to admit, I didn’t really understand how you were going to do what you were trying to do, but now I do. So now, let’s shape it.” And we shaped it, and edited it, and spent a great deal of time on it. And it was what it was supposed to be: the result of all my work at GW, it was my thesis as a comedian at that university. It was the most important thing I did my entire time there. Most of all, when graduated, she said: “You are a great performer, but never to lose the writer that you are. You can do both, which is rare, so don’t stop writing.” Since graduating I have written hundreds of stand-up bits, a few short scripts and generally punched up a lot of projects. I continue to struggle as a screenwriter, trying to figure out who I am in that world and gain a mastery of it. But it’s part of who I am as a comedian, and what seperates me from people who are just actors. It makes me something that in Hollywood is considered as good as gold: a creator. I can create and execute, write and perform. And as a performer who writes material, it has given me control and opportunity in Hollywood and in my life as a comedian. And I really owe her I do, and the English Dept. at GW for that all, dawg. I just wanted to end this piece with a grammatically incorrect sentence. T.J. Miller

by J J Cohen From Geoffrey Galt Harpham, president and director of the National Humanities Center, writing in The Chronicle: The alleviation of human suffering, the restoration of opportunity, and the resurrection of confidence must be our top priorities. But the present crisis must not be the horizon of our thinking; our most immediate concerns…

On Friday, May 7 at 3 p.m., the University Seminar on 19th-Century British Histories will be gathering at the Corcoran for its last meeting of the academic year. The meeting will feature an illustrated talk by Prof. Barbara Gates (University of Delaware) titled “Of Fungi and Fables: Beatrix Potter and the Science of Storytelling.” The…