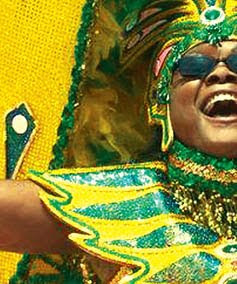 Seeing Shakespeare rarely conjures up the taste of jerk chicken or the sounds of Bob Marley, but that is not to say that the Bard was not meant for the beaches of the Caribbean. These were exactly Timothy Douglas’ thoughts when directing a Much Ado About Nothing set during the 2009 DC Caribbean Festival at the Folger Shakespeare Library Theatre.

The comedy boasts strong female characters, so rarely used to their full potential in most male-oriented productions of the play. Hence the setting in the matriarchal society of the Caribbean allows Beatrice to really lash Benedick with her wits. Feisty Beatrice (played by GW’s own Rachel Leslie) and caustic Benedick (Howard W. Overshown) really feel well matched as worthy adversaries in love. Overshown stands out due to his simple sarcastic delivery, that makes his lines sound like a current comedy routine rather than centuries old writings.

Not only do the two well-cast leads shine, but everyone equally garners their own laughs. Bumbling constable Dogberry (Alex Perez) and his mumbling partner Verges (Matt MacNelly) easily play up the laughs in crazy slapstick routines, that help to balance out the fast banter of Benedick and Beatrice. Evil conspirator Don John (also played by a GW graduate, Joel David Santner) is instantly menacing and hilarious in his tight 80s rock star jeans, attire that can only be worn by the worst of men.

Craig Wallace as Brother offers probably the most innovative element to this production. As the resident DJ of the group, he helps set the tone of the play based on whatever reggae he happens to be playing. In one of the most original scenes, a song within the original play is turned into a rap with the main women as chorus. These sporadic dance routines liven up the play eventually moving the audience to dance around at the curtain call.

The theater itself may be reminiscent of the original Globe Theatre and you cannot deny that the main hall is impressive, but this bright and vivacious production is what really stood out. Having seen one other more traditional production of this play, I can definitely say the eternal adaptability of the play is always interesting and why we still find ourselves crowding the theater and laughing harder than we would at a traditional production. 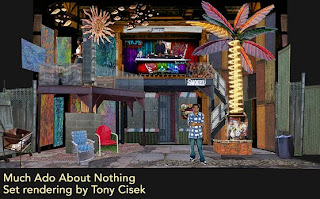 Much Ado About Nothing is running from October 21-November 29. Tickets range from $30-60 (although there is really no bad seat in the intimate theater). The Folger is a short walk from the Capitol South Metro stop on the Orange and Blue Lines.

What are you doing this summer? Avoid the boring internship or ice cream parlor job and travel to Italy for a poetry workshop instead! Professor Jane Shore will be teaching a poetry workshop this summer at Amalfi Coast Music and Arts Festival. The workshop runs from July 18-25 in Vietri sul Mare, Italy! You can…

Professor Margaret Soltan has just returned from Nashville, where she covered the annual convention of the NCAA for the online newspaper Inside Higher Education. Soltan, who attended Northwestern University’s Medill School of Journalism, was delighted to be a member of the press corps, and especially delighted to take part in a press conference, during which…

Apparently some staff of the GW Hatchet read our blog. From today’s paper, a short piece on Kathleen Rooney, our featured alumna of a few weeks back: —————– Stripping the Cover Kathleen Rooney is proof that there are plenty of jobs out of college. She is also proof that someone with a major in English…

Karen Russell, a young American writer who was recently featured in The New Yorker‘s “20 Under 40” list of young American literary talents, reads tonight from her latest work. The reading, the last of the year in the English Department’s Jenny McKean Moore series, is at 8 in the Marvin Center Amphitheater. All are welcome….