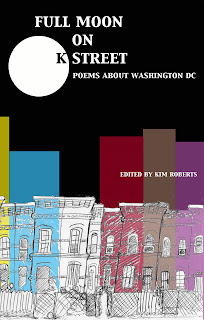 Plan B Press proudly announces the publication of the new anthology Full Moon on K Street: Poems About Washington, DC. Featuring over one hundred contemporary poems, the book captures DC’s unique sense of place, from monuments to parks, from lawyers to bus stations, from go-go music to chili half-smokes.

All poems were written between 1950 and the present, by past and current residents of the city. Edited by Kim Roberts, a former visiting poet at George Washington University and the publisher of the acclaimed online journal Beltway Poetry Quarterly, this anthology captures the city’s many moods: celebratory, angry, and fiercely political.

I hope you will all join me in congratulating our new PhDs-all successfully defended their dissertations in the last couple of weeks. They are: Michelle Beissel-Heath, Matt Fullerty, Cathy Hamann, Almila Ozdek, Myra Remigio, and Niles Tomlinson. Well done, everyone! Tara Ghoshal WallaceAssociate Professor of EnglishDirector of Graduate Studies Share on FacebookTweet

Our beloved colleague Maxine Clair is retiring. I’d like to share with you some comments from the student evaluations from her very last class. Professor Clair will be missed dearly. Each class with her is like a small step forward in my life as a student, and also a contribution to whatever I might achieve…

Please stop by the English Department office on the seventh floor of Rome Hall and contribute to the endeavor we’ve christened the Sticky Words Project. Our goal: cover the entire loooong wall in front of our seminar room (Rome 771) in quotations inscribed upon Post-It Notes. Your part of the mission: stop by and jot…