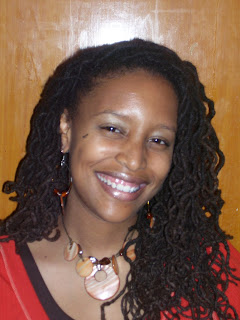 It is not uncommon to walk into college with one major and come out with an entirely different one and luckily for 2002 alumna Ayanna Jackson-Fowler, that major was English. Although Jackson-Fowler entered GW as a pre-Med major she quickly realized her real passion. She said, “I really enjoyed studying and creating literature. So, I figured that I should devote my life to doing this.”

As anyone reading this blog should know, there is no shortage of devoted professors within the English department, so Jackson-Fowler easily found her niche. She remembers particularly loving her classes with James Miller, Cynthia Leenerts, and Marshall Alcorn. Each professor had a long lasting impact on Jackson-Fowler. Dr. Miller introduced her to Zora Neale Hurston, Dr. Alcorn made critical theory accessible, and Dr. Leenerts introduced the concept of academic freedom in her course. “I was able to create my own paper topics,” said Jackson-Fowler. “I was so excited to get the opportunity to write about whatever I was interested in.”

Through all of these various teaching methods and texts, Jackson-Fowler learned what she really wanted to do with her life, teach. Not only did GW help her decide her future career, but also give her the skills to achieve in that career. “Each course that I took demanded a lot of me mentally, and this was beneficial to me because, when I got to graduate school, I found that I was already working at a more advanced level,” she said. If things ever got too complicated Jackson-Fowler easily found advice from various professors such as Debra Bruno and her adviser, Phyllis Mentzell Ryder.

It was not until graduate school that Jackson-Fowler really found her literary focus, Early Black Writing. After taking a few eighteenth and nineteenth century British literature courses she became fascinated by the work of former black slaves in the British Empire. “Studying Early Black Writing allows me to merge my interests in African American Literature and Eighteenth-Century African British Literature,” she said. ” Through exploring Early Black Writing, I am able to study the works of writers who are transatlantic, figuring in both American and British literature.” Jackson-Fowler’s dissertation explores the influence these writers had. She said, “I explore how the rhetoric of early black writers like Phillis Wheatley, Ignatius Sancho, Ottobah Cugoano, and Olaudah Equiano influenced radical women writers of the Romantic period.”

Eventually Jackson-Fowler would love to teach as well as research. She had the opportunity to teach and learn her teaching style through the Composition and Creative Nonfiction class she taught at Texas Tech. Jackson-Fowler’s main priority in the classroom is student participation. She said, “I have my students sit in a circle (as opposed to rows), and I prompt them to discuss the works that we read by asking them pointed, in-depth questions. This method is quite efficient because I find that students are able to learn from each other as they engage in discussion.”

Even though Jackson-Fowler has gone beyond GW and eventually hopes to teach like some of her favorite professors here, she still looks back at the university fondly. She may miss the Hippodrome and her old dorms, but there is one thing she can still do to keep herself involved in the GW community. “I also miss walking through The Quad on the main campus. Whenever I visit GW, I always make it a point to walk through there,” she said.

We hope to see her around campus soon and look forward to hearing more about her work.

Busboys and Poets has had to cancel this Sunday’s “Treme” event, featuring a screening of HBO’s new TV series based in New Orleans, so GW student blogger Sarah Kuczynski won’t be reading. Share on FacebookTweet

The English Department congratulates Bruce MacKinnon on the publication of his poem “The Bees,” published in the February issue of Poetry. Bruce’s collection of poems, Mystery Schools, was also just favorably reviewed in The Literary Review. Bruce teaches poetry in our Creative Writing program. We congratulate him for his achievements. The Bees One day the…

The English Department cordially welcomes Steven Knapp as the new president of the George Washington University. In case any readers need further proof of the many jobs open to English majors, we would like to point out that President Knapp is a scholar well published in both literature and critical theory. We also find it…