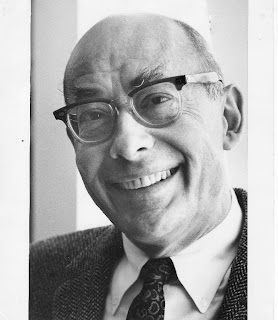 The English Department was sad to learn of the recent passing on August 25 of a beloved colleague, Edward R. Weismiller. We invite all who knew Prof. Weismiller, and those who want to find out about this remarkable man, to attend a celebration of his life on Thursday, Sept. 23 at 4 p.m. in Rome 771.

A gifted writer and scholar, Weismiller enjoyed a distinguished career. At age 20, while he was still an undergraduate at Cornell, he won the Yale Series of Younger Poets Prize for his 1936 collection The Deer Come Down. The honor was bestowed by Stephen Vincent Benet and made Weismiller the youngest person ever to receive the award. (The record stands to this day). In 1942, he earned his MA from Harvard, and in 1950 earned his D.Phil. at Oxford University in England, where he was a Rhodes Scholar. In 1953, he also earned a Litt.D. from Cornell College.

Even before he completed his formal education, however, Weismiller’s life took an interesting turn. In 1943, the poet and scholar was recruited to join the Office of Strategic Service (OSS) and proved a prodigy in the field of counterespionage. He became the first American officer to run a captured enemy agent back against the Germans. For this, Weismiller was awarded la Médaille de la reconnaissance française.

Weismiller’s daughter Georgia Sargeant recalled how her father’s involvement in WWII was eye-opening for him. “In those years he got a close look at the destruction caused by human viciousness and stupidity,” she says. (In fact, Weismiller published his classic novel, The Serpent Sleeping, a piece that drew on his experience in counterespionage, in 1962.) Still, Sargeant argues her father’s response to the sloppy side of counterespionage “probably made him even more determined to do work that creates order, and decency, and harmony.”

Born in 1915 on a little subsistence farm in rural Wisconsin, Weismiller had used education to make the unlikely transformation from a poor, motherless “scrawny farm boy” to a poet and scholar. For her father, explained Sargeant, “‘the finer things in life” was not a cliché, and it did not mean “gold-plated sink fixtures.”

Weismiller used his flair for words, his love of literature, and his gift for making friends in his long and successful career at GWU, which began in September 1968. He taught students, says his daughter, “not just so they could get good jobs, but so they could learn to think for themselves and appreciate what is good and beautiful.”


Weismiller’s last published book of poetry is Walking Toward the Sun (2002). In the introduction, U.S. Poet Laureate W.S. Merwin describes the collection and the man who wrote the poetry that appears in it. Merwin says, “[Weismiller] has arrived at what, in his writing at least, appears to be a full frontal self-appraisal, neither mocking nor whining, and along with nakedness, humor.” In the eponymous poem used to conclude this last published work of Weismiller’s, the poet connects an autobiographical awareness of his degenerating vision due to glaucoma with the old adage that “if you look straight at the sun/ you will go blind. ” Weismiller demonstrates the humility and refined state of self-reflection which Merwin lauds in the lines that follow: “People, things/will vanish./The great hungers/of the dark are shrouded in light./We are all walking toward the sun. Like everyone else, /I must go into the shadows to see.”

Prof. Weismiller received numerous awards and accolades in his lifetime. In addition to the Yale poetry prize, he was the recipient of a Guggenheim Fellowship, a National Endowment for the Humanities grant, a Rockefeller Foundation grant, and the 2001 Robert Fitzgerald Award for lifetime contribution to the study of metrics and versification.

Prof. Weismiller was a leading authority on the prosody of John Milton. In 2002 he was Scholar in Residence at the Library of Congress, where he produced A Variorum Commentary on the Poems of John Milton and a line-by-line analysis of the versifications of Milton’s minor poems.

You can read selected works by Professor Emeritus Edward R. Weismiller here. We welcome everyone to join us in on Thursday to remember this gifted and humane man of letters.

Lori Brister, who is completing her PhD in GW’s English Department under the direction of Professor Jennifer Green-Lewis, was chosen to deliver the graduate student opening remarks at this year’s official Graduate Student Welcome Ceremony.  Lori was introduced by Provost Lerman, and then gave a speech to about 500 new graduate students in the Dorothy…

The Fat Studies Reader, a collection of essays to which GW English graduate student Julia McCrossin contributed a piece, was mentioned in a recent New Yorker article: So what’s wrong with putting on an extra pound, or ten pounds, or, for that matter, a hundred and ten? According to the contributors to “The Fat Studies…