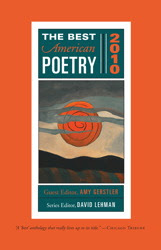 In the year 1988, poet and editor David Lehman started The Best American Poetry series. The guest editor of the anthology examines the collective output of large and small literary journals; from this the guest editor attempts to glean 75 poems. The sampling that is selected is representative of the “best” poems of that year. The 2010 Guest Editor is Amy Gerstler; but, perhaps more importantly in this context, one of the featured poets is GWU’s own Prof. Gregory Pardlo!

The particular poem of Pardlo’s is entitled “Written By Himself”, and it was featured in the American Poetry Review, Vol. 38, No. 4. Coincidentally, I was immersed in a reading of the 1845 life narrative of Frederick Douglass when I received word that Pardlo had been BAPped. The subtitle, or qualifying statement, that appears in the preface to Douglass’s narrative and the title of Pardlo’s poem were identical! (I tend to think these connections are mind-blowing miracles…it’s just me, don’t fret.) Of course, I decided to check this out with the poet himself. This is what Pardlo had to say apropos of my Douglass connection question:

Finally, and probably why I started this blog in the first place, I should mention Prof. Pardlo will be reading at The New School in NYC, on Thursday, September 23, 2010. Other poets featured in this year’s anthology will be participating in this event, The BAP 2010 Launch Reading The reading begins at 7 pm (doors open at 6:30) so if you’re in the city, or need an excuse to take a trip there, be sure to check it out!

As President of the Residence Hall Association, Mike Massaroli is not only a junior studying Political Science, but he is a legitimate GW Celebrity.  AND, he cares about poetry.  Kenny Hoffman recently interviewed Mike about his favorite poem, Ernest Lawrence Thayer’s “Casey at the Bat,” and how poems figure into the life of the RHA.   THE…

GW English Alum Nishi Chawla (PhD, 1996) NISHI CHAWLA: “A NATION SHOULD BE JUDGED BY HOW WELL IT RESPECTS ITS WOMEN.” Professor Margaret Soltan: Let’s start with the big news first.  Your play, Indira, will be presented here in DC, at Spectrum Theater, on Oct 18 at 4 PM.   Is this your first play?  Give us a quick description…

Georgia Bobley grew up in New York and graduated from GWU with a BA in 2010 and an MA in 2015, both in English Literature. She now lives in Dubai where she is working with a team to launch the Middle Eastern outlets of the American websites SHOPSTYLE (e-commerce) and POPSUGAR (an editorial website).  GW…