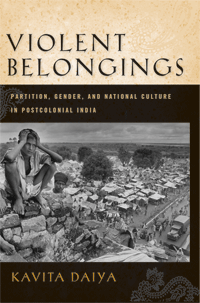 Congratulations to Professor Kavita Daiya, who has recently published her book Violent Belongings: Partition, Gender, and Postcolonial Nationalism in India. Professor Daiya answered a few questions for me about her book, which should be of great interest to students of many disciplines, not just English.

How did the research for Violent Belongings begin? Did the process of writing the book require extensive travel to India?

Violent Belongings happened because I was interested in why, suddenly, after so many years of being a cosmopolitan, secular community, Bombay in the 1990s was seeing increasing outbreaks of Hindu-Muslim communal violence. At the time, the Indian economy had started on the road to liberalization; yet, inspite of globalization, people seemed to me to be “turning back” into reclaiming non-secular investments. So I thought, why, even though we are becoming more globalized, are Indians also becoming more culturally invested in Hindu-Muslim ethnic identities? And why, unlike in the past, were Indian women becoming more politically involved in communal conflict? As I researched the issue, and the story of religious/ethnic identity in India, it became apparent to me that the British Partition of India in 1947 was a key moment, if I wanted to understand what was happening in contemporary Bombay and indeed India, with respect to secularism, ethnicity, gender and violent conflict.

The research for this book was done in the US, UK and India. Apart from the Chicago area libraries (I was a graduate student at the University of Chicago) I did archival research at the British Library in India over several summers, where I looked at anything and everything related to 1947 and India – official records, reports, newspapers, novels and memoirs. At the National Film Archive of India, I looked at Partition films and trade magazines from 1947-1960; at the Maharashtra State Government Archives, I looked at letters that individual Partition migrants – Hindu, Sikh, Jewish – wrote in 1947 to the Government of India, asking for help, and expressing anger at their imminent forced migration.

What led you to an academic interest in the Partition of India?

Well, as I mentioned earlier, while studying globalization and contemporary urban ethnic conflict in Bombay at Chicago, I became increasingly interested in the history of religious/ethnic identity in India. As I researched this more, I felt that the 1947 Partition was somehow a crucial part of the story. I didn’t know how exactly, but the facts were there: within a few months, the British decided to partition India before making it independent in 1947, ensuring the subsequent ethnic bloodbath as 2 million people were killed in Hindu-Sikh vs. Muslim violence. At this time, 16 million people forced to migrate between the newly created nations India and Pakistan, and this remains the world’s largest mass migration in under 9 months.

I started researching this stupendous moment of migration and violence: what exactly happened, how, how did people at the time make sense of it, how was it represented in literature, film, mass culture? How does it get talked about today in South Asian public culture, in postcolonial immigrant fiction and new Partition films in Bollywood? Most books on Indian history either start in 1947, or end at it; few focused on 1947 itself as more than a temporary “moment of insanity.” So I tried to understand what happened in 1947 itself – with migrants and refugees, with violence to male and female bodies, with new ideas about citizenship – through the study of cultural texts in the public sphere. Later, I discovered that there were other people like me who, at the same time, were also investigating Partition but from the social sciences — Gyan Pandey, Urvashi Butalia, Ritu Menon, and Kamal Bhasin, to name a few.

How do the issues that you explore in the book play into the courses that you teach at GWU?

Well, my graduate and undergraduate courses dwell, in good measure, on questions about nationalism, imperialism, race and ethnicity, violence, and gender. They explore these questions through a combination of literature and film, and like the book, connect what is happening out there in Asia, Africa or the Caribbean to what is happening in Euro-American contexts. Also, like the book, they approach contemporary concerns by looking at them historically, connecting seemingly discontinuous events to think about current problems in new ways. So even if the course is not focused on South Asia, the issues that my book is passionate about – migration, violence, human rights, difference – dominate the courses I teach; most of these courses, because of the priority I give to questions about gender and sexuality from a feminist perspective, are cross-listed with GW’s Women’s Studies Program.

What are your current research pursuits?

I am currently on sabbatical in India, interviewing men and women here who are Partition survivors; we are fast losing that generation, and I am recording these interviews on digital video, to create an online archive of testimonies of the 1947 Partition experience at www.1947Partition.org. These interviews will also play a central role in my second book, currently in progress. The CCAS has been generous with helping me to fund this research.

We wish Professor Daiya all the best in her future endeavors!

The Journal of Literary and Cultural Disability Studies Have you ever wondered how those scholarly articles that you use in your research papers make it into print?  Perhaps you’ve even wondered what would happen to one of your own projects if you pursued it beyond the end of the semester and attempted to place it…

Gayle Wald wants you to know that her office door is always open. As the new department chair after January 1, 2010, Wald hopes to bridge the imaginary gap between faculty and students. “I want to engage the undergraduate majors. To give them a feeling of belonging to something through events and enhanced advising,” she…

Shaun-Dae Clark Reads a Poem Shaun-Dae Clark is a second year student at The George Washington University. She works at Gelman Library and will be studying abroad at the London School of Economics this fall. -Justice Spencer, Nico Page, Marwa Roshan The Recitation The Interview interviewed by Justice Spencer Justice: Why did you choose the poem?…