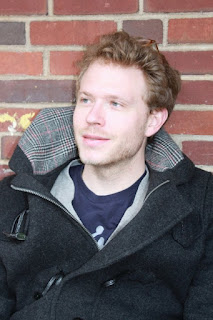 The English department is very pleased to introduce readers of this blog to our newest faculty member, Dr. Daniel DeWispelare, who will be joining us as an assistant professor in September. Prof. DeWispelare received his PhD from the University of Pennsylvania, and does research primarily in the British nineteenth century, with a focus on Romanticism, although his interests are wide-ranging.

What follows is a Q&A to introduce Daniel, who will be teaching Critical Methods (ENGL 2800W.10) and The Romantic Movement (ENGL 3530.10) this fall. You’ll see why we were so eager to bring him to GW when you peruse his thoughtful responses and learn more about his amazing research.

GW: Tell us about your research.

DDeW: Recently I was in an airport and I saw an advertisement for HSBC bank that noted, “There are five times more people learning English in China than there are people in England.”  This observation, courtesy of a world financial giant, is a good way into my research into eighteenth- and nineteenth-century anglophone literature, which I organize around historicizing the category “World English.”  Specifically, what this means is that I am interested in tracing the mechanisms by which English writers spread their language around the globe while simultaneously justifying that spread as legitimate.  By mechanisms, I mean things like grammar texts, translational manuals, appraisals of other languages, and colonial pedagogical instruments, and by justification, I mean the series of philosophical hoops anglophone writers went through to stitch English’s aesthetic capabilities to the political promises the expanding British Empire extended to both English and imperial subjects.
As HSBC reminds us, we tend to see the juggernaut of contemporary “World English” as a kind of fait accompli—culturally devastating perhaps but naturalized and even demanded by the practical dynamics of an increasingly globalized world.  And, as most popular histories of the English language will report, the language is mixed in vocabulary and grammar, a language formed over centuries by layered exchanges between diverse linguistic cultures.  Such a medium, many of these language historians argue, is thus fit and perhaps even predetermined to be spoken from “China to Peru” (to borrow the prophetic words of Samuel Johnson).

What my research tries to show, however, is that if we look closely at the boom in language and literacy materials that begins in the late-eighteenth century, we see a series of very self-conscious attempts to reframe English as an aesthetic medium whose internal diversity could correlate with, and indeed validate, colonial expansion and global presence.  Moreover, we see the diverse ways that anglophone writers began to exploit new aesthetic opportunities made available by naturalizing non-English linguistic and cultural residues within English-language literary works.

Within this general theoretical framework, I am currently working on two book projects.  The first derives from my doctoral research and details the ways by which the expansion and standardization of English was used by writers of literature.  Specifically, I show how manipulations of translated terms and techniques acts as a precondition for aesthetic developments we associate with Romanticism.

In my second book project, I am studying a genre of late-eighteenth- and early-nineteenth-century dialect writing that I call “dialect dialogues.”  These “dialect dialogues” (some of which we might read in my upcoming course on Romanticism!) have been assumed simply to showcase provincial habits for metropolitan audiences, but I read these as political allegories that attempt to counter the gradual death of local linguistic traditions by satirizing the presumptions of standard English speakers and the literacy manuals they brought to people.

GW: I notice you’re teaching Critical Methods in the fall as well as a course on Romanticism. Tell us a bit about the latter. What’s interesting about Romanticism?
DDeW: My take is that there is nothing that is not interesting about Romanticism! It is a stereotype of scholars that they tend to think of all things as originating in the period they study, but when it comes to Romanticism, this is actually true!  First perhaps, it is useful to give some brief definitions for students interested in the course.  Romanticism refers to a literary period, roughly corresponding to the years between about 1775 and 1832, give or take a few decades on either end.  Romanticism also refers to several fairly specific habits of mind, intellectual practices, as well as aesthetic and generic conventions that at the time were both pan-European and transatlantic in scope.  So according to who you read—and this is important, because the debate is still very much alive—Romanticism is a reaction against Enlightenment thinking; or, it is the pinnacle of Enlightenment individualism where the poet’s genius overwhelms his or her own subjectivity; according to others still, Romanticism is merely a false construction, and our own definition of it prevents us from fully appreciating the broad array of writing composed in this period.  This chain of definitions can go on and on, and is in fact one of the problems we will discuss in the course this Fall.
As I briefly suggested above, I am attracted to the category “Romanticism” because works written during this period of time are thematically and aesthetically united social and cultural events that reverberate even today: the rise of industrial capitalism, the rise of the colonial system, the rise of nationalism, the rise of criticisms of nationalism, the rise of political parties, the rise of democracy, the rise of the labor movement, the rise of literacy.  Lest we think this was only a period of “rises,” we can also mention intensifications, in urbanization, racialization, modern warfare, human rights, abolition, feminism, and political rights, to name a few.  And finally, a series of collapses that have indelibly marked that period and our own: the collapse of the common land systems, the collapse of absolutism, the collapse of Latinity, the collapse of certain religious structures, and so on.

In short, Romanticism is a wonderfully complex and fulfilling chapter in the history of literature and culture. I encourage any and all students to attend this class, especially if you are interested in the standard bearers of Romanticism, including Wordsworth, Coleridge, Austen, Burns, and Keats, and especially if you are interested in going beyond that canonical territory toward the investigation of writers who have been very important to recent research in the field.

The debates about Massive Open Online Courses continues, and Professor Margaret Soltan continues to be sought after for her thoughts on the subject.  She was recently featured talking about her Poetry MOOC in Poets and Writers Magazine:  Soltan, who teaches a course through Udemy titled Poetry: What It Is, and How to Understand It, says…

Congratulations to Professor Kavita Daiya, who has recently published her book Violent Belongings: Partition, Gender, and Postcolonial Nationalism in India. Professor Daiya answered a few questions for me about her book, which should be of great interest to students of many disciplines, not just English. How did the research for Violent Belongings begin? Did the…

We’re happy to share Jane Shore’s new poem, “This One,” now in both the print and online version of the current issue of The New Yorker! You can access the poem at The New Yorker’s website here. Share on FacebookTweet

By GW Student Reporter There was a tempest of sorts happening outside as I rushed over puddles and clumps of wet leaves to catch one of newly-arrived Alexa Alice Joubin’s courses entitled “Global Shakespeare.” The course title could easily be describing Alexa herself, a native of Taiwan, who first encountered a performance of the Bard’s…