Skip to content
Please join us for a two-day event on Cuba and its diaspora sponsored by the English Department with the assistance of American Studies and Africana Studies, under the auspices of the Wang Visiting Professor of Contemporary English.
Cuba in the World: Literature, Politics, Performance
A Public Reading and Symposium
October 8 and 9, 2009
Marvin Center
George Washington University 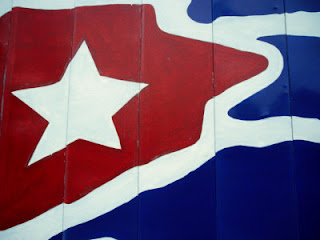 The GW programs in English, American Studies and Africana Studies have gathered some of the most influential and innovative scholars and cultural workers in the fields of Cuban and Cuban Diasporic Studies to consider new ways of thinking about Cuba and its cultures, its people and its politics. Far too often, Cuba has been characterized as a nation of endless transitions: the beginning and the end of empire, pre- and post-slavery, before and after La Revolución, from exile to beyond. Our question—“What is Cuba now?”—asks scholars and artists to offer a response that acknowledges this vexing, anticipatory discourse, one in which Cuba and Cuban history are imagined as forever “on the verge.”

Reading and Discussion with novelist Mayra Montero: Thursday, October 8, 8 p.m., Marvin Center, 3rd-Floor Amphitheater, 21st Street N.W. between H and Eye Streets
Mayra Montero is an award-winning novelist and renowned journalist. She is the author of Dancing to “Almendra,” The Last Night I Spent with You, and many other works. Born in Cuba and living in Puerto Rico, Montero has become an active voice in the Puerto Rico independence movement.

Peter Kornbluh, Director of Cuba and Chile Documentation Projects, National Security Archive, George Washington University, and author of Bay of Pigs Declassified: The Secret CIA Report on the Invasion of Cuba, The Pinochet File: A Declassified Dossier on Atrocity and Accountability, and other works

Yesenia Selier, Writer and Performer, with work on race, music, and Cuban society appearing in such publications as Encuentro en la red and Islas; a former member of the Juan Marinello Center for Research on Cuban Culture, Havana

La Lupe traces the life and art of La Lupe, “The Queen of Latin Soul,” one of the few women to reach iconic status in the world of salsa. Ela Troyano is a Cuban-American filmmaker and documentary artist living in New York. Troyano will be available for question and answer following the viewing.

We look forward to seeing you at our “Cuba in the World” events and welcome your participation in the discussions that will follow.

[Last update May 14, 2010] They….. …. stay at GW for the English Department’s BA/MA program (Laura Feigin) or to attend GW Law School (Amanda Heerwig) …. get a grant to make art in Paris (Anya Firestone) …. work as a legal assistant in a small energy firm in Dupont Circle as a prelude to…

Please join us on Thursday April 24 for a talk by Kathleen Biddick: “The Political Theology of the Archive: Reflections on a Project” The author of The Shock of Medievalism (Duke 1998) and The Typological Imaginary: Circumcision, History, Technology (University of Pennsylvania Press, 2003), Kathleen Biddick is professor of history at Temple University. The talk…

Mr. Aslam was worth the wait! Despite last fall’s disappointment that Mr. Aslam could not arrive as planned, we welcome him now to GW. Tuesday night marked the beginning of the month-long seminar that Mr. Aslam will be conducting for ten undergraduates. The one credit course includes reading three novels by contemporary British authors and…