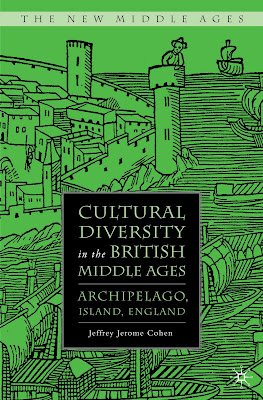 Nice cover, eh? I like the little man peering out of the tower best.

And if a volume possesses a cover, it must be real. There’s a smallish problem: the author line is supposed to read “Edited By Jeffrey Jerome Cohen.” I’m told the error will be swiftly fixed.

The book is on schedule for August publication. Here’s the official description:

Through close readings of both familiar and obscure medieval texts, the contributors to this volume attempt to read England as a singularly powerful entity within a vast geopolitical network. This capacious world can be glimpsed in the cultural flows connecting the Normans of Sicily with the rulers of England, or Chaucer with legends arriving from Bohemia. It can also be seen in surprising places in literature, as when green children are discovered in twelfth-century Yorkshire or when Welsh animals begin to speak of the long history of their land’s colonization. The contributors to this volume seek moments of cultural admixture and heterogeneity within texts that have often been assumed to belong to a single, national canon, discovering moments when familiar and bounded space erupt into unexpected diversity and infinite realms.

This intriguing collection of essays sets out to trouble the myth of the English nation, calling into question the wholeness, autonomy, insularity, and inevitability of the political entity we now call the British Isles. Cohen’s “infinite realms project” recasts the island (the symbol of totality and autonomy) as an archipelago (a symbol of fragmentation and interdependence) whose current political configuration can in no way simply be read back into the past. The essays, on texts both familiar and arcane, not only invite us to rethink the textual canons of Great Britain’s four main ethnic groups, but more radically to interrogate the fictiveness of political identity itself. This is not just another collection touting “cultural diversity” among hypostasized identities; these essays invite us to reimagine political collectivities, rethinking the ways in which they encounter one another, clash, assimilate, and reform around new identities.

Laurie A. Finke
Kenyon College; co-author of King Arthur and the Myth of History

Start saving your pennies now: the book is going to cost $74.95. Fashioning a cover in such an attractive shade of green requires much expensive pigment.

Readers of this blog know that Prof. Robert McRuer has twice taken lucky students in his “Transnational Film Studies and LGBTQ Cultures” to Prague for the annual Czech Gay and Lesbian Film Festival. For GWU students and for Robert, a highlight of the course is getting to know their counterparts in the Czech Republic. Now,…

For reasons that will become more clear very soon, may we suggest that you add to your summer reading list a work by Edward P. Jones? Perhaps his Pulitzer Prize winning novel The Known World? Or maybe his breathtaking collection of stories All Aunt Hagar’s Children? These are books that are well worth your time…

This is an image that has been circulating online since last week, when The New Yorker magazine posted it on its blog. [Click here for a link to the White House Flickr site, where you can see a huge image of the same.] As an English professor and as someone who loves to be edited…

Emily Cahn reports: The University’s first vice president for research says he hopes to raise the University’s research profile by starting new research centers in the fields of autism, computational biology, science policy, energy, sustainability and neglected diseases. Well, you don’t need to hear it from me again. But you will. Could the day please…

I know readers of this blog were eagerly awaiting highlights from the department annual report for 2009-10. Drum roll, please. Summary statement: English is a healthy and productive unit that contributes to CCAS and University objectives in teaching, research, and service. Our faculty are highly productive, publishing scholarly and creative writing. As evidenced by course…