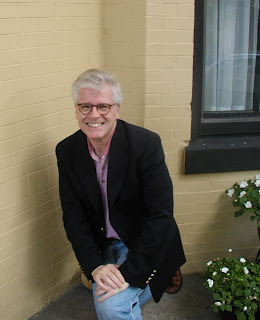 One day Thomas Mallon looked out his office window in Rome Hall and had a strange sense of déja vu. “I look out into the apartment of one of my characters,” he said. Mallon’s novel Fellow Travelers was set in 1950s DC, at which point the dorm West End was an apartment where he placed one of his protagonists who worked nearby at the State Department.

This may have been one of Mallon’s eeriest coincidences, but DC had always had a significance for Mallon and his writing. Most of Mallon’s novels are set in DC: Henry and Clara, about the couple who shared the box at Ford’s Theatre with the Lincolns on the night of the assassination, Two Moons, which takes place at the old observatory in Foggy Bottom, and his next book will be on Watergate, an international phenomenon, but also part of Mallon’s backyard. “I live in the historic district of Foggy Bottom. I love the neighborhood. I love Washington. I’ve lived here only for six years, but I’ve spent a lot of time in the city over the past thirty,” he said. “My house was built in 1890, it works on my imagination.”

Even though Mallon is a native New Yorker (where he has an apartment still), he has always felt welcomed by DC. He said, “It’s one of those cities that isn’t too enormous for a writer to wrap his mind around. Almost like Albany for William Kennedy. I’ve always felt at home here.” Mallon finds DC has a hidden literary scene also. “If you got to a party in Washington they assume you’re a political writer. A novelist seems more exotic. Whereas in New York, saying you are a writer is the same as saying you are a waiter who really wants to be an actor,” he said. The city is especially crucial to Mallon’s work as a writer of historical fiction. “Washington is an interesting place for a writer. You have two kinds of history operating at once, national and local history. I take these big national stories and personalize them,” he said.

Mallon had been writing about DC for so long that it was only a matter of time until he moved here permanently. He read an article about the books university presidents like to give to guests and found that former president Stephen Joel Trachtenberg used to give out Mallon’s novel Two Moons. “I wanted to have a perch at a university so I wrote Trachtenberg in 2003,” he said. Since teaching here, Mallon has noticed fundamental differences between his time teaching at Vassar and at GW. He finds his colleagues much friendlier compared to the “fractious” atmosphere of Vassar’s department. He said, “I am always gratified by how nice colleagues are by telling me they’re read something I’ve written or attending a reading of mine.”

GW students also offer a welcome change, “GW students are cheerful, eager, forthright in a very friendly way. They engage you and are adversarial in a friendly way,” he said. Mallon has been teaching a creative classes a year as well as various Deans Seminars. He has previously enjoyed teaching one on Lincoln’s assassination and looks forward to teaching one this spring on diaries.

Mallon’s latest publication, Yours Ever: People and Their Letters, is essentially a companion volume to his previous book on diaries from fifteen years ago. “I kept interrupting the book to write novels. It took a long time to read this material and soak yourself in these letters. It was a very off and on process,” he said. This is Mallon’s seventh nonfiction book, another of which he notes has an obscure theme. He said, “My subjects in literary criticism have been odd subjects like diaries, letters, plagiarism, these odd precincts of literary history.” Mallon admits he is not unbiased in his selections of letters. “I am opinionated in a somewhat arbitrary way. The book is very personal. I don’t feel the need to be comprehensive,” he said. The collection resulted in letters not just of famous writers, but politicians, prisoners, and soldiers from the Middle Ages to current day.

When Mallon is not teaching or writing books, he contributes to the New Yorker, the New York Times Book Review, and the Atlantic Monthly. “I read and write all day long. I’ve done that my whole adult life,” he said. “I cannot imagine doing anything else.” This is no surprise, for one of Mallon’s most vivid memories from childhood was when his mother read him his favorite picture book one evening and he suddenly took over, realizing he could read. He said, “I understood at that moment that I could read. To me, it was as if I’d just been born.”

Mallon feels extremely grateful that he has been able to organize his life around his passions and as he said, “Teaching is an extension of that.”

Don’t miss your chance to study the history of the book at the Folger. Applications due March 10. More information here. Share on FacebookTweet

It was my honor to serve as the Faculty Speaker at Saturday’s CCAS Celebration, the prelude to commencement. You may read the Hatchet account of the day here, and my more personal ruminations here. Share on FacebookTweet

Our very own Dr. Matt Fullerty (English Ph.D. 2008) has begun a new tenure-track position at Chowan University in North Carolina teaching Creative Writing (fiction and poetry) and Composition. In spring 2013 he will teach English and American literature as well as an upper-level fiction class. GW students do not fear; Dr. Fullerty continues to teach at GW…

Carrie Cummings is a student in Professor McAleavey’s Intermediate Poetry 2, 107W, class. Mother’s Arrival in Omaha, 1985 He peeled her off the canvas of a Klimt he saw in Paris,wrapped her up in brown paper– her red tendrils leaked from the edges –and shipped her home to meet his mother(who, upon her arrival, said,“the…