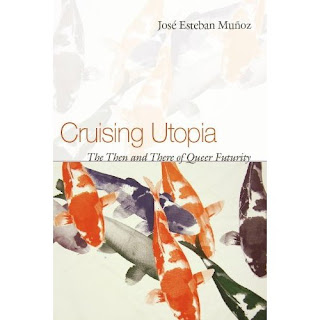 The room was packed. Latecomers were forced to stand in the back of the room next to the champagne and chocolate dipped strawberries. To many GW students Thursday is the start of the weekend, but the GW English Department was celebrating for a different reason, the launch of Wang Visiting Professor José Muñoz’s latest book, Cruising Utopia: The Then and There of Queer Futurity.

The book is a new critical feat in the realm of Queer and Performance studies, so naturally something of such significance deserved a noble introduction. Gayle Wald, who has known Muñoz for over fifteen years, did the honor, “A good theory book inspires our own work,” she said.

Muñoz was impressed with the introduction, joking he had nothing more to say. He continued to say that his time at GW had been better than he could have hoped. He said, “This semester has been rejuvenating. The general collegiality has been completely engaging. I have one more month here and I hope to benefit from that collegiality.”

Muñoz went on to describe the book as a, “a polemic against dominant strand in queer critique.” He turned to material that had been “haunting” him since graduate school, primarily the work of German Idealism in relation to Queer Theory and politics. This eventually led him to the idea of utopia, but Muñoz is careful to emphasize the book is not about optimism. “I really do not believe in optimism,” he said. “How do you have hope without optimism? Hope is a mode of insisting on ontological state.”

The book itself focuses on “wacky” interests such as Warhol’s factory, Stonewall of the 1950s, and The New York School of Poetry. “In the tradition of utopias, I am writing about oddballs and maniacs,” Muñoz said.

Muñoz read from the introduction first. “Queerness is performative . Not a being, but a being for here and the future,” he read. Next he jumped to the conclusion in between which, “All this stuff happens,” Muñoz said jokingly. The conclusion of the book, “Take Ecstasy With Me” is named after a Magnetic Fields song. Muñoz writes about the timeliness of Queer Theory. He read, “Queerness is not yet here. Thus we must always be future bound in our designs and desires.” He encourages the reader to “look beyond the here and now” to something “fuller, vaster, more sensual, and brighter.” Muñoz touched on this idea again during the Q&A period. “The argument is for the then and there as opposed to the here and now,” he said.

Muñoz finished to a room full of applause. Champagne corks ready to be popped for one of the most influential scholars right now.

To say Jose Dalisay has had a productive career is an understatement. The Philippines-born writer has published over 20 works in fiction and nonfiction since 1983 and also has an extensive background as a dramatist, columnist and film writer. Born in the Philippine island province Romblon in 1954, Dalisay spent his formative years in Manila,…

Don’t miss the next event in our Jenny McKean Moore Reading Series: Kiese Laymon who will present this Thursday, at 7:30 PM, in the Marvin Center Amphitheater.  Laymon is the author of the novel, Long Division, and a collection of essays entitled, How to Slowly Kill Yourself and Others in America. He is Associate Professor of…

Sunil Yapa will read from his debut novel,  Your Heart is a Muscle the Size of a Fist The Jenny McKean Moore Reading Series  Wednesday, February 8th, 7:30 PM  Gelman 702 A novel set amid the heated conflict of Seattle’s 1999 World Trade Organization protests. On a rainy, cold day in November, young Victor—a boyish, scrappy world traveler…