This Dean’s seminar takes advantage of the theater offerings in Washington and asks the question:  What is new about new plays?  Are contemporary playwrights reworking classical themes or are their works entirely new entities?  What themes reappear and how are they presented?  The course also considers how classical plays are re-imagined for modern audiences.  For example, is a Shakespearean work staged in a different political or social milieu than the original production?  Why would directors make these types of artistic decisions?  What does it mean for plays to be culturally relevant?  Students will consider who attends the theater and who will be in the audience in the future.  These questions form a large part of decisions about what plays are selected to be produced each year and the nature of those productions.  We will read at least three classical plays and three new plays as well as attend two new plays. 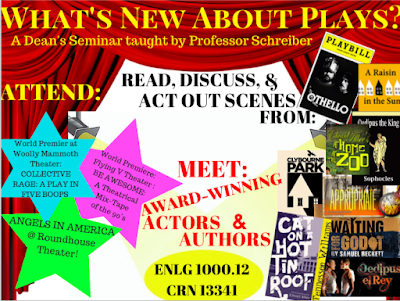 Highlights of Fall 2016 Course:
*Attend World Premier at Woolly Mammoth Theater of COLLECTIVE RAGE: A PLAY IN FIVE BOOPS by award-winning writer Jen Silverman, directed by Mike Donahue.  We will meet with Jen Silverman to discuss the play and her inspirations and her play writing process!  Jen Silverman is a two-time MacDowell fellow, recipient of a New York Foundation for the Arts grant, the Helen Merrill Fund Award for emerging playwrights, and the Yale Drama Series Award for STILL. She is the 2016-2017 Playwrights of New York (PoNY) Fellow at the Lark.
*Attend World Premier at the Flying V Theater of Be Awesome: A Theatrical Mix-Tape of the 90’s, conceived and directed by Jason Schlafstein, winner of the John Aniello Award for Outstanding Emerging Theatre Company! Jason Schlafstein will come to class to discuss the play; how he writes collaboratively; and why he started his own theater company at age 24!
*Attend Angels in America, the DC theatrical event of the Fall season, at Roundhouse Theater!  Actors Dawn Ursula (Helen Hayes Award Winner), Kimberly Gilbert (Helen Hayes Award Winner), Thomas Keegan, and Jon Hudson Odom (Helen Hayes Award Winner) will come to class to discuss their roles and workshop with us!
Plays we will read, discuss, and act out scenes from:  Oedipus the King by Sophocles, Oedipus El Rey by Luis Alfaro, At Home at the Zoo by Edward Albee, Waiting for Godot by Samuel Beckett, Othello by William Shakespeare, A Raisin in the Sun by Lorraine Hansberry, Clybourne Park by Bruce Norris, Appropriate by Branden Jacobs-Jenkins, and Cat on a Hot Tin Roof by Tennessee Williams.

Check out some of the exciting new courses this coming semester from British Modernism to disability in the Middle Ages. Share on FacebookTweet

This announcement went out via the Thurston Hall listerv, but anyone who is interested in declaring an English major or minor at GW is very welcome to attend! If you’re even considering a major/minor in English or Creative Writing, come out to the English department’s upcoming info session in Thurston! This program, formally titled “Why And How…