This exciting course links authors Toni Morrison and William Faulkner through the ways in which their fictional and discursive practices reflect on each other.  Specifically, we will examine how the texts of both authors reenact and resist racism and patriarchal structures; how they explore the ways in which memory and the past construct identity; and how they experiment with style. 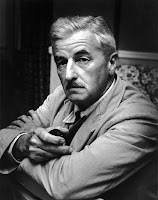 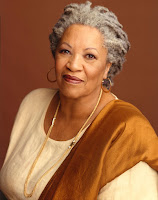 Professor Evelyn Schreiber
Tuesday/Thursday 11:10-12:25 PM
ENGL 3826 (CRN 86757)
Rome Hall 350
This course fulfills two English Major requirements:
After-1900 (C) and Minority/Postcolonial (D).
We will consider the ways in which the texts illuminate a continuum in American literature through discussions of socially constructed identity and issues of race, class, and gender.  In addition, the class utilizes cultural studies, trauma studies, and psychoanalytic critical approaches to the texts of these authors.
Texts include: Light in August, The Sound and the Fury, Absalom, Absalom!, Song of Solomon, The Bluest Eye, Beloved, God Help The Child. 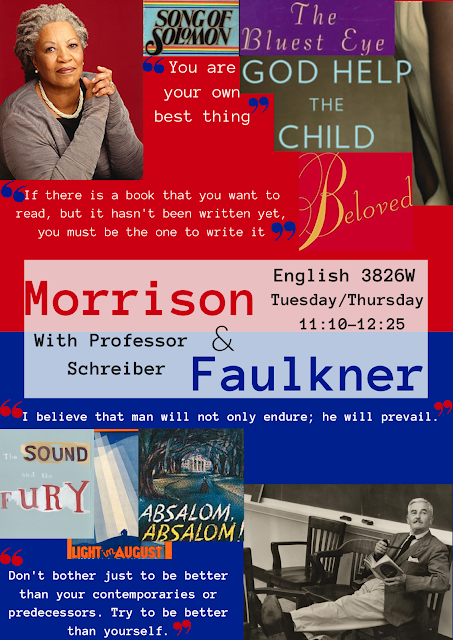 Professor Schreiber is one of the leading Morrison scholars in the country, and is President of the Toni Morrison Society (TMS) and a member of the TMS Bench by the Road Committee. She organizes and presents at yearly panels for TMS at American Literature Association Conference. She is also a leading scholar in the emerging field of trauma studies, and serves as the Co-Chair for New Directions Program, the Washington Center for Psychoanalysis, Inc.
She is the author of two outstanding books:

Race, Trauma, and Home in the Novels of Toni Morrison is an interdisciplinary study of trauma in Morrison’s fiction and was awarded the Toni Morrison Society Book Prize for best single-authored book on Morrison’s work, 2010-2012. It was nominated for the MLA William Sanders Scarborough Prize for an outstanding scholarly study of black American literature or culture.

Subversive Voices: Eroticizing the Other in William Faulkner and Toni Morrisonexamines subjectivity and race via the theory of Jacques Lacan and Cultural Studies. This book received the Toni Morrison Society Book Prize for best book on Morrison, 2000-2003; it also was nominated for the MLA prize for best first book, 2003.

Screening Shakespeare (ENGL 6260) Monday, 4:10-6:00 pm Professor Alexa Alice Joubin Fall 2017 Semester Shakespeare has been screened–projected on the silver screen and filtered by various ideologies—since 1899. What critical resources might we bring to the task of interpreting performances on film, television, in digital video, and as filmed theatre pieces? This seminar examines the adaptation…

“For lessons in literature,” GW Today reminds readers, “George Washington University students do not have to rely on just books—they can meet authors in person through the English Department’s campus lecture series and public readings this semester. Several writers will come to campus through the Jenny McKean Moore Reading Series, led by Lisa Page, acting…

Michel de Montaigne GW Students!  Professor Ormond Seavey’s courses for spring afford some great opportunities for exposing yourself to a wide range of literature, from its early American beginnings to the classic Education of Henry Adams, published in 1907. English 3490 Early American Literature and Culture CRN: 43931, Tue/Thur 3:45-5 PM Beginning with a Shakespeare…

*The following blog was created by students in Professor Mitchell’s Dean’s Scholars in Globalization Class during Spring semester, 2015: “Disabled People and the Holocaust”.  Each student has written an entry for exhibitions, museums, and memorials attended during a 10 day trip to Germany.  The primary goal of our investigations was to examine the medical mass…

The English Department at George Washington University includes one of the largest all-undergraduate creative writing programs in the U.S. Each semester between 400 and 500 students study the writing of plays, filmscripts, short fiction, poetry, and creative non-fiction in small, 15-person classes. About half of these courses are at the introductory level, and appeal to…

The 1992 film Basic Instinct and many other cultural texts and issues will be discussed Professor Robert McRuer taught two courses in the interdisciplinary field lgbt studies this fall, and students in both classes will be coming together on Saturday, December 10, to present their work-in-progress.  Students from both “Transnational Queer Film Studies and LGBTQ Cultures” (English…